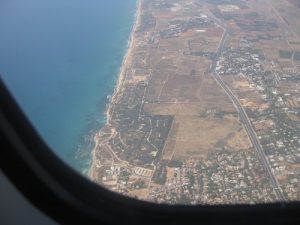 Sometimes I forget my limitations. Often I ignore them, on purpose. In particular, when it comes to travel, though I do make some concessions to the bloody brain—I am willing to take my chances.

I knew the trip was was going to be a challenge. I took it anyway.

The flight out of Pittsburgh was uneventful. I arrived in Newark at 2:00 pm on Tuesday. Unfortunately, my overnight flight to Amsterdam didn’t depart until 6:00 pm.

Long stopovers are always problematic. Prolonged exposure to overwhelming sensory input guarantees that the bloody brain will take revenge—inevitable fatigue and predictable headaches with no relief in sight.

The was another long wait before the next flight, to Paris, departed. But Cindy, my travel companion, had the foresight to reserve a pod in the Amsterdam airport’s Yotel for a few hours, where I took a much needed nap, and a refreshing shower.

I always travel light, with carry-on luggage only, to ensure that when necessary, I won’t have to check any of my bags. Because I was up for a journey involving several stop-overs, I kept my bags with me.

The journey from Amsterdam to Tel Aviv involved a (very) short stopover in Paris. Despite my explanation that the chances that my bag making it onto the flight from Paris to Tel Aviv were slim to none, the KLM staff member at the gate in Amsterdam insisted I check it in. Since the onset of the bloody brain, I suffer from anxiety issues—panic set in, preventing me from resting on either flight.

The bag didn’t make it. It was now Friday.

Usually, when I arrive at my destination, I do my best to take a rest to combat the ill effects of the journey and ensure that my visit is not a total nightmare.

After I arrived at my parents’ house in Haifa, instead of having time to rest, as I had originally planned, I had to go shopping for necessities. The bag didn’t arrive until Friday afternoon.

On Saturday afternoon, Cindy and I made our way from Haifa, in northern Israel, down to Eilat, at the southernmost tip of the country—a four and a half hours’ drive. And early the next morning we set off into Jordan, for a day-long tour of the incredible Nabataean city of Petra. We drove back to Haifa the next day, on Monday.

After a lovely five-day stay in Israel, we flew (directly) to Amsterdam, where we spent the next four day. Our time in the Netherlands was wonderful. In addition to consuming delicious food and visiting beautiful sights, we visited several museums and took a couple of canal tours.

I knew I was overdoing it—I was exhausted throughout. Headaches threatened at several points during the trip, both during our stay in Israel and Holland, as well as en route.

Before the trip, I knew I would be overdoing it, even without the various mishaps along the way. But I also knew that it would be worth the price.

And it was, well worth the price.

I arrived back in Pittsburgh suffering from debilitating fatigue, the beginnings of an excruciating headache that ended up restricting me to a darkened room for a couple of days, and a goofy smile on my face.