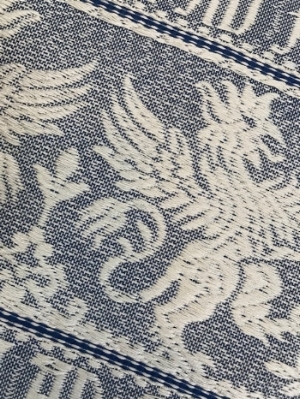 Roaming the vendor hall during a weaving conference, an intriguing pillow case caught my eye. I stopped at the booth to examine it. It looked as though it was a patchwork of four differently colored handwoven patches with invisible joins. I studied it closely—they were definitely not sewn together. It was more like an invisible join in knitting. But how—

That was my first introduction to the Peruvian technique of discontinuous warp. At the time, newly revived, it was named warp scaffolding. A few years later, when I attended another conference, I saw a weaver from the highlands of Peru using the technique.

Most indigenous techniques I’m aware of have been practiced continuously through the years, passed down from generation to generation to this day. Naalbinding in Scandinavia, weaving in Bhutan and Guatemala, blackwork embroidery in Italy, knitting in Iceland, and shiny indigo dyeing in China.

Some communities, located in remote places, with little interaction with modern society, continued to practice their traditions without interruption.

Many Berber weavers of the Atlas Mountains in north Africa, because of societal norms, stay close to home, in the Atlas Mountains of Morocco, continue to pass their weaving traditions from mother to daughter. The Kuna Indians of Panama, for similar reasons, still produce molas as eye catching as they’ve been through the ages. And the women of the nomadic Rabari tribes in the Kutch Desert of the Indian subcontinent, continue to practice mirror embroidery to deflect the evil eye as they have through the ages.

Other communities continued to ply their traditional arts because forward thinkers realized early on that if they don’t intervene and encourage indigenous artisans to maintain their traditions they would become endangered.

In Perugia, Italy, a woman named Guiditta Brozzetti, was such a visionary. Not only did she provide outlets to sell textiles woven by poverty stricken weavers in the surrounding countryside at fair prices, but she also built a workshop to teach younger women the art of weaving textiles traditional to the area. Nilda Callañaupa Alvarez did a similar service for weavers in the Cusco, Peru, area. Aran knitting in Ireland, blackwork embroiderers in Italy, and many others, also benefited from such forward thinking.

Unfortunately, like the Patan Patola (double ikat) of Gujarat, India, many techniques are on the brink of extinction. Cheap knockoffs, facilitated by the industrial revolution, make it difficult for indigenous artisans to support themselves and their families through their textile traditions.

Also, the younger generation in more accessible locales now have better access than ever to education. And with the advent of the internet, the modern world reaches an increasing number of remote communities. More and more young people are tempted away to earn a living through contemporary work which is much more lucrative than the labor intensive traditional ways. 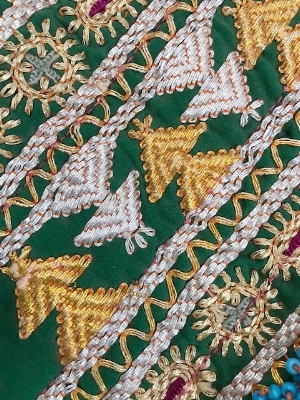 The Patan patola technique is so laborious that weaving a single sari takes four to six months. The temptation for youngsters to leave the tradition behind them is great—only three families in Patan still weave genuine patola. Consequently, Patan weavers have trouble meeting the demand—Patan patola saris aren’t available in stores. They are all are special ordered, and there is a waiting period of several years.

Fortunately, many of us in the industrialized world, including ethnic textile aficionados and a significant number of government agencies, including in India, Bhutan and the United States, recognize the value in maintaining these traditions and continue to work towards that goal, providing resources to artisans struggling to earn a living wage through their textile traditions.

Textiles are an integral part of the human condition, and traditional textiles help us maintain our connections between past and present and our ties to each other. They prevent us from losing our humanity.

We must keep textile traditions alive. In order to prevent them from dying out, we need to encourage indigenous textile artisans to continue to practice their traditions.