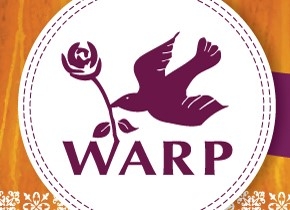 When the editor of Selvedge Magazine (https://www.selvedge.org) showed interest in my journey to WARP, I didn’t need to think about it—the words were right there, ready to spill over onto the page.

WARP, an acronym for Weave A Real Peace, is a networking organization (https://weavearealpeace.org) many of whose members include textile artists and textile aficionados, anthropologists, and activists. Its mission is “to foster a global network of enthusiasts who value the importance of textiles to grassroots economies.”

I grew up in Israel through four wars. Or was it five?

In primary school I learnt to identify potential booby traps, including pens and buttons—I still hesitate before I pick up a pen of the ground. When I was I middle school, my classmates and I visited wounded soldiers at a nearby hospital. In high school, we had guard duty at our school. We sat at the entrance, checking strangers’ bags, watching for anything suspicious. Everyone I knew served in the army. We were all involved, to different extents, in different ways, directly or indirectly. Most of us directly. We were all affected psychologically, to varying degrees—stress, depression, anxiety, PTSD.

The next piece of the puzzle was in my upbringing—the importance of education was taken for granted by everyone around me. I grew up surrounded by educators. My father was a professor. (I ended up in academia myself.) As a teenager, my best friend and I became involved in a couple of literacy programs—helping children from illiterate families break the cycle. I tutored a couple of new immigrant, teaching them to read in Hebrew.

Also, my mother worked at the International Center for Community Training for Developing Countries. The participants, who came from Africa and Asia, were taught hygiene, healthy diet, and first aid. They were also trained as teachers, to pass their knowledge on in their home communities, to improve their quality of life. Both staff and students became family friends.

My love of textiles also played a significant role in my journey towards WARP.

Mum taught me to knit when I was seven, and in elementary school I learned needlepoint and machine sewing. Lessons in basket weaving and knotted pile rug making came in high school. And as an adult I learned a variety of additional fiber and textile arts, including spinning, weaving, and felting.

In addition, I couldn’t help but absorb my parents’ love of ethnic textiles. Druze woven rugs covered our floors, and the cushions scattered in our living rooms were made by Arab artisans. Dad also brought back a silk saris from India for Mum and an embroidered apron from Hungary for me.

The final piece of the puzzle appeared in the wake of 9/11—I had to do something, something that made a difference, that would have a long-term effect. I wanted to become involved in something that promoted education, one of our more effective tools to prevent war.

That was when I came across an ad for WARP in a weaving magazine—all the pieces of the puzzle clicked into place.

I knew that improving the quality of life in communities in need would be inaevitably lead to increase their children’s access to education. In addition, there was the added benefit to me of working through textile traditions.

How could I not join the organization?