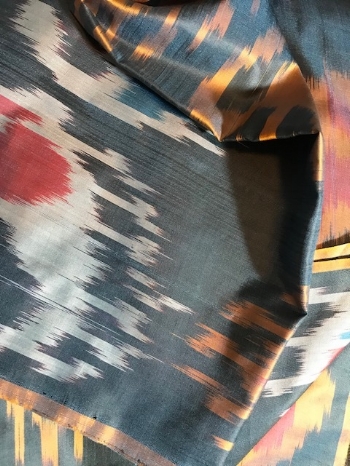 I became a maker at a young age. I was first exposed to a textile technique as a seven year old when Mum taught me to knit. Through the years I learned a variety of textile techniques, including needlepoint, crocheting, felting, and spinning. I enjoyed them all.

Learning to weave was different. It was as if I had come home, as if I was a weaver in a previous life. Every time I sat at the loom, I felt connected to weavers near and far, in space and in time.,

My enthusiasm for the fiber and textile arts took off. I attended festivals, meetings, and conferences. I wanted to see (and feel) it all—scrumptious raw cashmere, hand spun silk, gorgeous hand woven clothing. The weaver’s handshake became a part of my new normal—I fondled fabric and fiber wherever I went, whether I was among kindred spirits or complete strangers, whether it was reciprocated with a smile or elicited startled looks.

At weaving and spinning events I was also exposed to a broad range of ethnic textiles—silk scarves from Laos, felted slippers from Turkey, Mexican rugs. I was mesmerized.

My love for traditional textiles leaped to a new height after I joined WARP (Weave A Real Peace) after 9/11.

WARP is a networking organization for people who are interested in making a difference in the world. Many of WARP’s members work towards helping impoverished textile artisans improve their quality of life through their traditional textiles.

After the terror attack in New York City, I had to help, to change the world for the better. I came across an advertisement for WARP in a weaving magazine. Its mission and the work of its members called to me. I knew that improving quality of life increases awareness of the importance of education, which in turn is an effective tool to foster peace. And here was WARP, an organization that made a difference at the global level. Not only was it about helping communities in need, but it also promoted global connections. I was not surprised to learn that helping these these communities led to better access to education. The added bonus that WARP’s members achieved results through textiles was irresistible.

By October 2001 I joined the organization. And I felt as I had when I first sat at the loom, as if I’d arrived home. This was where I belonged. Among kindred spirits, who wanted to change the world for the better, through textiles.

A couple of years later, I started writing a regular column for the WARP newsletter “Textile Techniques from Around the World”. As I wrote and researched, my interest and passion for traditional textiles grew.

In the spring of 2006, five years after I joined WARP, my world fell apart. And my identity as a mother, mathematician, textile artist, and ethnic textile aficionado was threatened.

I suffered several strokes and underwent three brain surgeries, which wreaked havoc on me and my life.

In particular, I could only dream of new weaving projects—I could no longer weave.

But within my first month of recovery of the subsequent brain surgeries. I started weaving my dreams.

As a brain injury survivor, the project challenged me, but I persevered and completed it—yards of shimmering silk in the colors of sunset on the water. It had a quality that the old Deb would have been unable to produce.

I enjoyed writing articles about textile techniques for the WARP newsletter, but now it took on a new dimension—the research consumed me. Also, in the process of recovery, I started writing, and with practice and help for a writing coach my writing improved.

Just before the brain bleeds, the WARP board suggested that I compile a collection of my essays from the newsletter, and sell the collection to WARP members as a fundraiser. As my skill as a writer grew, so did my vision of the fundraiser. From a grass roots project it evolved into a book (“Thread Around the World: From Arabian Weaving to Batik in Zimbabwe”) that I hope will reach a broader audience, one that will raise awareness of cultures worldwide and make a difference.