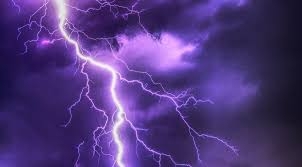 Pixabay https://pixabay.com/en/flash-thunderstorm-super-cell-2568383/
I remember standing with Mum at the window, watching a thunderstorm. I remember oohing and aahing over the light show. Taking fierce joy in the pouring rain, the glorious lightening preceding the crash of thunder, I forgot my brothers and my mother beside me. At one point, shortly after the show began, Mum retreated to stand behind us. I assumed that she was merely making more room for us.
It was only years later that I learned that she was terrified of thunderstorms.
We went to the beach almost every weekend during the summer. I remember Mum sitting in the shade reading a book while we played in the water—she didn’t know how to swim. She tried learning a couple of times, but was unsuccessful. She told me she was too old to learn, too afraid of the water.
I remember tumbling around in the waves, losing all orientation, the sand churned up, I couldn’t see. I had to trust the waves to throw me ashore before I ran out of breath.
Dad was usually with us in the water—I remember swimming along side him, reveling in his company, proud of my skill and stamina. We often swam far, out of Mum’s sight. Was she afraid for me? Perhaps even terrified? I never thought to ask.
I was an adult when she finally told me that she had encouraged my brothers and I to take on activities she couldn’t participate in because she didn’t want us to miss out as she had. She didn’t want her fears and limitations to affect us.
Mum was born with a condition named talipes, more commonly known as clubfoot. In her case, both feet were turned inward at a ninety degree angle. By the time she was school-age, she underwent several surgeries to correct the problem and, but they were only partially successful.
I recently asked her how it impacted on her life. She told me she couldn’t run and when she walked up stairs her feet turned in. She added that though it was limiting and at times made her feel self-conscious, she didn’t see herself as disabled.
I know her limitations went beyond her inability to run. She loved cooking, but every so often, she had to take breaks to put her feet up. She also had trouble finding shoes that fit properly and didn’t hurt. In addition, she had issues with her balance. She never learned to ice skate or ski, and though she tried, was never able to ride a two-wheeler.
Despite her difficulties, Mum excelled at some physical activities, belying her appearance—she was under five feet tall, looked frail, and was visibly unsteady on her feet.
She loved dancing, and was good at it, as was my father. They danced everything from the foxtrot, salsa, and waltz, to jazz and rock. At parties, their skill often elicited audience applause.
Mum was also a wicked table tennis player who loved surprising first-time opponents with her skill. After crushing her rivals with her deadly serves, powerful volleys, and good reflexes, her opponents often refused her offers for a rematch.
She may have been unable to run, but she usually walked at a fair clip. I remember myself as a kid, having to hustle to keep up with her. And although she never joined us on long hikes over uneven terrain, she often walked down to the shops and back—a good twenty minute walk each way.
Now, her age has caught up with her. Her balance is more of a problem as are her issues with her feet. She walks at a slower pace and no longer dances. She uses cane. But I strongly suspect that given the opportunity to play ping-pong, she’d throw all caution to the wind, and crush her opponent, probably knowing full well that she’d pay the price later on.
Was she the source of my courage and resilience through my recovery from brain injury? The reason that despite being fully aware of my limitations, I refuse to give in to the bloody brain completely? Why I continue to push some of my boundaries, knowing full well that I’d pay the price later?