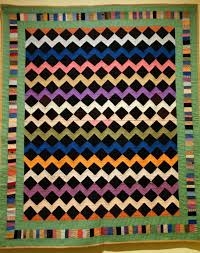 My son, Daniel, a toddler at the time, and I sat on the grass knoll overlooking the site of the auction, an Amish auction. Daniel, mesmerized, watched the kids playing tag and hide-and-seek among the quilts flapping in the breeze. An older girl pushed a little boy on a swing. I suspected that she was old enough to have had a hand in the making of one of those gorgeous quilts.

against saturated hues. Who chose the combination of colors for the top? The girl or her mother? Perhaps the mother allowed the girl to piece the top on a treadle sewing machine, while the mother designed their next quilt.

Though Amish needle-workers typically use a machine to piece the top at home, the women usually get together in group for a “quilting,” where they quilt the top onto the ground fabric by hand.

Amish communities are very close and extremely conservative. Changes in

designs, fabrics and colors are made only with community approval, which is why there are distinct regional styles. Adhering to community guidelines also means that changes occur very slowly—the evolution of Amish quilting styles have always lagged behind that of the “English,” as the Amish refer to outsiders.

Quilting became popular among the Amish in the 1870’s. Most of the first Amish quilts were made in one solid dark color in worsted wool, with elaborate

used. As the “English” started making Crazy quilts, the Amish began using basic block patterns, which had been popular among the “English” several years earlier.

In the early 1900s brighter colors started appearing. During World War II, as

wool and cotton became scarce, synthetics replaced natural fabrics. Due to the

difficulty in working with synthetics, quilting patterns became less intricate. The next significant change occurred (by the 1940s) when pastels were added to the Amish Palette, prints started appearing, and appliqué work emerged.

started producing quilts for sale. Quilting is still an important part of community life—the Amish continue to make quilts the traditional way, machine pieced and hand-quilted, for family use as well as for sale at craft shops and auctions.

We’d originally hoped to purchase a quilt at the auction, but gave up—we weren’t the only “English” who had discovered the auction. The bidding on the quilts was fierce. We consoled ourselves with rich and creamy Amish-made ice cream.