I’m sure there are many of us who while experiencing a life threatening ordeal question our feelings about death. 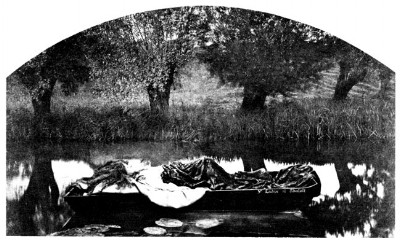 The Lady of Shalott by Henry Peach Robinson (1830-1901) (labeled for reuse)
I remember my fear of dying during my first few months after my brain bleeds. Each seizure scared me—would this one kill me? Every brain MRI or a CT scan brought on fear that I would die inside the machine, alone.
Between extreme headaches, seizures, and cognitive issues, my entire world revolved around the bloody brain. Doctors’ appointments, physical therapy, ER visits, and hospitalizations took up much of my time. I could no longer drive, work, or mother. I shuffled through my days, focused on survival, merely existing.
After I started taking anti-seizure meds, the seizures were milder and occurred less often. Around the same time the frequency of my trips to the ER diminished, and my life, such as it was, settled into a pattern.
Dependent on others for rides and unable to work, I spent most of my time at home, alone. Tiring easily, subject to crippling fatigue, and prone to vertigo and loss of balance, I was incapable of doing much.
One day, waking up from a much needed nap, my mind wandered, and the topic of death emerged from the crevices of my mind. My quality of life, or lack thereof, seemed unbearable. How much longer could I tolerate with it?
What if I were to reach the point where I felt the need to actively seek death? I wouldn’t want it to be messy and it wouldn’t be right to ask anyone to help. The only logical option was medication. I would need something effective. Was there anything in my growing arsenal of medication that would work quickly, with little to no discomfort. I started inventorying the meds on my night stand. Anti-seizure-meds? No. Advil—maybe. What about blood pressure—
I slammed the lid down on my thoughts.
It was one thing to experience a fleeting thought about suicide, but quite another to explore methods. And so rationally, too.
I have since been diagnosed with severe depression and have experienced several bouts of suicide ideation.
Several years into my recovery, yet again waking from a nap, my mind roamed. Once more, I found myself exploring my feelings about of death. As my thoughts wandered, it occurred to me that death no longer terrified me  as it had during the early days, after the bleeds.
Intrigued, I dug deeper. Did these thoughts count as suicide ideation? It didn’t feel the same. There were no shades of “they’ll be better off without me” or “I can’t bear living like this.”
This felt more like a state of being, a level of acceptance.
I live with an axe hanging over my head, though it is usually off my radar. I am very much aware of my mortality—the threat of new bleeds will always be with me. Angiomas can become symptomatic even if they don’t bleed, and I have several remaining in my brain. Also, angiomas can grow back.
As I explored my emotions, I realized that my awareness of of my mortality has expanded beyond the bloody brain. When I travel, and encounter passengers who are afraid of flying, I wonder about death from a plane crash. Every time the thought appears, I shrug internally. There isn’t anything I can do about it.
Searching through my inner files, I found that I couldn’t detect any traces of fear of death from causes beyond my control. Of course, I’d rather it were quick and not too painful. And it would be nice if the timing weren’t too inconvenient.
I certainly don’t want to die. In particular, I don’t want to harm my loved ones, especially my kids.
Also, I really like my life now. I would really like to see my memoir do well and make a significant difference in the world. I would like to finish the other books I’m working on.
But ultimately, if it happens it happens.
Moving on.