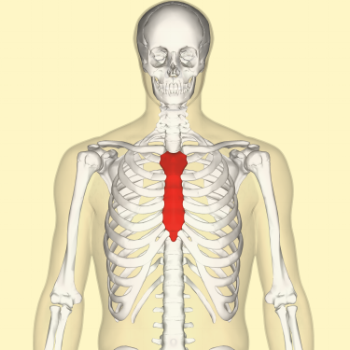 Body of Sternum Frontal en:Anatomography
I remember hearing myself yell and the box of books shifting as the corner slammed into my chest. I don’t remember much else about the actual fall.
I knew I didn’t hit my head—was that my first thought? Did I yell because of my fear of another brain injury? I am head shy, ever since the brain surgeries.
I remember lying on the rug telling myself I should assess the damage. I recall hesitating, reluctant to find out. I couldn’t afford to seriously hurt myself—I had to teach the next day and travel the day after.
No pain in my head—check. Though I did feel a headache coming on. No signs of breaking or spraining anything—check.
I was still lying on the rug when I became fully aware of the pain. My knee was burning—just a scrape. The pain in my chest—
A memory slammed into me—a painful sternal rub. I was in the neuro-ICU after I was diagnosed with a CSF (cerebral spinal fluid) leak. In the hopes that the leak would heal itself, the doctors administered a lumbar drain to relieve pressure from CSF at the site of the leak.
The lumbar drain involved a tube running from my spinal column through the small of my back, into a bag (similar to a reverse IV). During this procedure, the tube got dislodged twice, causing CSF to leak through the hole in my back, creating a puddle under on the bed. Each time, to plug the leak, a neurosurgery resident stitched it up. In both cases it was done without anesthetic. Apparently, the procedure didn’t even warrant any, even a local.
The first time it happened, the nurse offered a hand for me to squeeze every time the needle jabbed into me. I vaguely remember squeezing it so hard that I later apologized for causing him pain.
During the second time, it was up to me to deal with the pain, alone. The nurse offered no help and I didn’t have the wherewithal to ask for it.
The resident jabbed through my skin again and again, seemingly for ever. The room was dark. It couldn’t have been, he had to see in order to stitch me up. I must have lost consciousness.
My next memory was unbearable pain in my chest. Why was the resident rubbing my chest with his knuckles, and applying so much pressure? Only recently did I learn that he was performing a sternal rub. Sternal rubs are used to assess the level of consciousness.
He rubbed so hard my chest and the resulting pain so intense, I had trouble breathing. The next day, my difficulties worsened. I was only capable of taking shallow breaths. An x-ray determined that nothing was broken—I was merely bruised.
To me, there was nothing merely about this pain.
And now, after the corner of the box broke my fall, I was having similar difficulties breathing. And like that time, in hospital, the bruising subsided a few days later, and with it my breathing issues.