The Mayan weaver was kneeling on the ground in front of her loom weaving complex patterns. I stood above her mesmerized, watching her fingers flying across the warp, one row, then another and another. How did she do that, so deftly, without consulting a design? How did she keep track of all those colors? 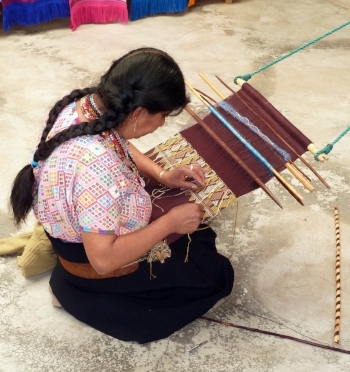 The backstrap (body tensioned) loom is one of the simplest looms used by indigenous weavers. The backstrap refers to a strap that fits around the back of the weaver’s midsection. In the front, the strap is attached to the loom’s breast beam. The warp is then usually strung between a stationary object and the breast beam, and the tension on the warp is set by the weaver leaning against the strap. Backstrap looms vary in different parts of the world, in their construction, whether the strap is made of leather or fabric, and the warp is continuous or discontinuous, and the particulars of the position of the weaver relative to the loom.

In Central and South America and in isolated pockets in Asia, most weavers either kneel or sit in front of the loom, the back beam is tied to a tree, or a pole. They control the tension on the warp is obtained by leaning back. Of all the versions of the backstrap looms, this one is by far the easiest one to transport and set up.

In southeast Asia, the majority of backstrap weavers usually sit upright, legs outstretched, feet braced against the back beam.

For narrow warps, such as belt looms or in tablet weaving, there’s no need for a back beam. The warp threads are knotted together and the knot is tied to a stationary object. But in cases where the finished fabric is wider, a device that spreads out the warp threads helps maintain an even tension. In most cases the back beam plays that role. But in the Ainu looms in Japan, a bamboo reed, hanging behind the heddle bars both keeps the order in the warp threads and prevents them from bunching up.

In Japan and Korea, some of the looms are transitional, a hybrid between a back strap loom and a single harness loom, where the entire frame is stationary. As in traditional backstrap weaving, the weaver leans against a strap for tensioning. But unlike most backstrap looms, where sheds are created by raising and lowering heddle bars, in transitional looms, the back beam is part of a stationary frame, where the harness, which creates the shed, is operated through a cord that is attached to the weaver’s foot.

Whichever technique back strap weaver uses, it’s clear that it is very hard on the body. A Bhutanese weaver I met at a weaving conference more than a decade ago, mentioned that the pain in her back and outstretched legs can become unbearable, limiting her hours of weaving.

As I watched the Mayan weaver kneeling on the ground, advancing row by row, and she created a gorgeous huipil, I wondered how long she could keep going—her back must have been killing her.