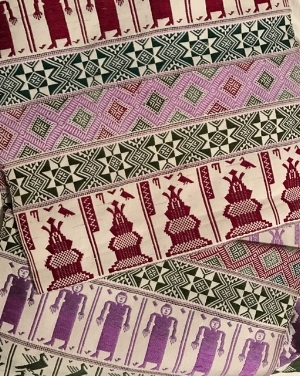 Hand towel to the king

Rinzin pointed at her mother, Leki. “She’s a weaver to the king.”

My friendship with Rinzin Wangmo, began in the summer of 2006 at a weaving conference, where Rinzin and Leki were selling their gorgeous handwoven textiles. Apparently, Leki is well known in Bhutan for her weaving. (She is a master weaver.)

The next time I saw them was the following summer. I was in Pheonix for a consultation with Dr. Spetzler, my soon to be neurosurgeon. Rinzin and Leki passed through there after participating in the Santa Fe International Folk Art Market. They just happened to be holding a trunk show shortly after my consultation. They had heard of my ill health from a mutual friend, and had lit butter lamps for me in their local (Buddhist) temple.

The textiles were fabulous, all woven by either Leki or Rinzin. But one stood out from the rest–an exquisite silk piece that Leki had woven on a backstrap loom. before Rinzin opened it up all the way, I thought it was a table runner–it was more than two and a half yards in length, beautifully patterned with stupas and human figures, Buddhist monks perhaps. Apparently, Leki had originally woven it as a Hand Towel to the King, intending to present itto the (fourth) king. I couldn’t begin to to imagine anyone drying their hands on it, royal or otherwise.

Between the beauty of the piece and the story that went with it, I had to buy it.

Only recently, more than nine years since I purchased the Hand Towel to The King, did Rinzin tell me why I got the towel and not the king. Apparently, Leki needed money for that trip to the U.S. so she brought it with her for sale instead of presenting it to Druk Gyalpo Jigme Singye Wangchuck, the fourth king of Bhutan.

P.S. Druk Gyalpo means “Dragon King,” which is the title that all five of Bhutan’s kings have held. An apt title for the kings of Bhutan, also known as Drukyul, or “Land of Dragons.” (The people of Bhutan call themselves the Drukpa, meaning “Dragon people.”)

P.P.S. Given the timing, Leki must have planned to present the piece to the fourth king just before he abdicated in favor of the current king, Druk Gyalpo Jigme Khesar Namgyel Wangchuck.