I admire these women, these accomplished artists who struggled against the shackles society placed on them. In order to achieve success, many felt the need to work within those restrictions, ignoring a yen to be treated as their male counterparts during the period of impressionism. Some struggled against those bonds, defying societal norms, forging a path for the less assertive and for the female artists to come.
I was aware of similar struggles facing female scientists and authors. James D. Watson and Francis Crick took credit of Nobel Prize worthy discoveries make by the English chemist Rosalind Elsie Franklin, and famed author Mary Ann Evans, whose work would have been considered unladylike, published under the pseudonym George Eliot. But until I attended the exhibit Her Paris, though I wasn’t surprised, it didn’t occur to me that women artists contended with similar prejudices.
I wove my way through the exhibit halls, marveling at the artwork. Some of the artists worked within the confines society placed on them, focusing on ladylike subjects such as motherhood or women’s fashion. But others were defiant, like Rosa Bonheur who visited slaughterhouses to understand the musculoskeletal system of cattle in order to depict them in accurately in her paintings.
Fascinated by the work of these women, I advanced deeper into the exhibit, perusing the paintings. At first, I was confused when I found myself skirting some of them. I wanted to continue exploring, moving from one picture to the next. But my brain wouldn’t let me go there. Through wisps of fog, I noticed I was avoiding herds of fellow attendees. I started making the connections after I flinched away from the sight of a woman wearing garishly colored attire, and kept my distance from a particularly boisterous group.
I was suffering from my usual difficulties processing too much sensory input. I realized through my thickening inner fog that I needed to make my escape. But by then it was too late—as often occurs in such situations, my ability make my own choices was waning. Vaguely aware I was heading towards the exit, incapable of proactively heading there, I followed the crowd.
Still able to maintain some semblance of control, I managed to skip paintings that attracted more than two or three viewers. But in my usual reluctance to give in to the bloody brain, I occasionally paused to my neck to catch a glimpse of works of art that caught my eye and drew me in.
One painting in particular spoke to me. The colors, neutral, drab even, browns and grays, weren’t the focus of my interest, neither was the skill of the artist. The main reason I felt a connection between us was the subject—the naked trees reflected in a lake lent a serenity to the painting, a much needed break from my surroundings.
I stood behind a couple admirers who were discussing the artist’s technique, allowing peace to blanket me. Finally, with the quiet grounding me in a less than ideal situation, keeping the rest of the world at bay, I could relax. As the two art critics moved on, an object that they had blocked appeared—a sharply defined paddler-bearing canoe in the left hand corner of the painting. It was directed inward. In my mind’s eye, I saw it moving forward, towards the center of the painting.
The thought of it disrupting the stillness and advancing into the lake was unbearable.
I turned away. About to continue on my way, I paused. Why did I turn away? Why did the canoe and its paddler disturb me?
I turned back and contemplated the painting for a long moment.
Though the canoe added to the composition of the painting, it detracted from the sense of serenity. But why?
Since my surgeries, I have become overly sensitive to sensory input. While my kids still lived at home, I closed myself off in my room when the sound of the television was too much for me or when they had friends over. To this day, when overwhelmed by crowds or noise, I crave peace and quiet.
On the other hand, since the surgeries, I am better able to connect with my fellow human beings. Where before the bleeds I was very much a loner, now I enjoy human contact. I love interacting with my students (though they can be a tad rambunctious at times) and I appreciate time spent time with friends. 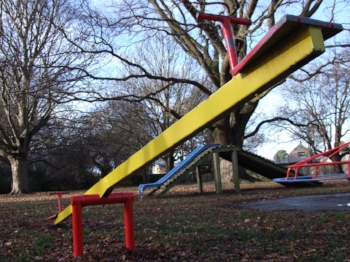 by Gabriel Pollard
Perhaps in the past, less comfortable with the world around me, I didn’t feel the need for a balance between the noise and the quiet. Or maybe, less aware at the time, I didn’t see that I lived in an imbalance.
Now, I clearly need both the human interaction and my alone time. While unbalanced, I feel damaged, wrong. balanced, I am more me, more human.
Was this the source of my unease? The canoe, the one human being in the picture? Could it be that it formed an imbalance? I was certainly already out of balance because of the crowds around me.
Suddenly,  it clicked. The serenity in the painting guided me out of the chaos. The ripples caused by paddler in his canoe disrupted the peace, tipping me back over the edge, towards the chaos.
In that moment of clarity, I knew I had to make my escape, before I was caught once more in the mayhem. I headed towards the exit, towards the quiet.
I needed to find my balance once more.