As I weave, I breathe life into a textile, and when I free it from the loom a textile is born to take its place in the world. The Berber of the Middle Atlas of Morocco also see weaving as a metaphor for creating an entity with an essence of its own. But to the Berber weavers, at its completion the textile dies.

I didn’t understand—how could anyone possibly regard textiles as dead objects, let alone their creators. Each handmade textile I own comes alive with its own stories, the making of it, its previous life, and its place in the world, its ethnicity.

My Mongolian rug evokes an image of it laying on the floor of a yurt. When I trace the pattern on my Laotian silk scarf, I remember the lovely lady from Laos who told me the mythological stories behind the patterns. And as I look at the wall hanging in my living room, one of the first textiles I wove, I think of my friendship with my weaving teacher, Nancy. 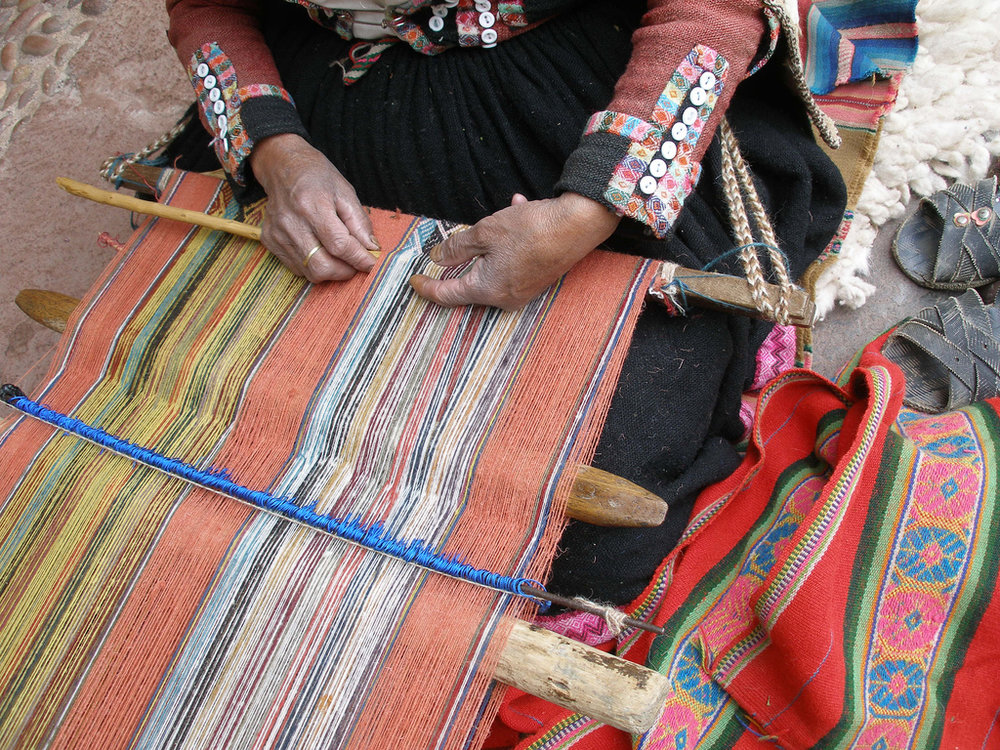 I couldn’t accept the Berber belief. Dead was too final, too flat. There had to be more to the story. And indeed, after a good amount of research, I found that there was more to the picture. Much more.

Apparently, to the Berber weavers, weaving represents the life-cycle of a son growing up in a male dominated society. The preparations for the actual weaving embody the male child’s years under his mother’s supervision. The transition from boyhood to adulthood, marked by circumcision among the Muslim Berber, is represented by the final step in setting up the loom, when the top and bottom beams are affixed to the loom, the warp stretched between them.

A boy is male in gender only until he comes of age, which is when he also acquires a soul, a male identity. Once the weft first crosses the warp, the textile too acquires a soul.

As the weaver starts passing the shuttle to and fro, the young adult sets on his way through life away from his mother’s sphere of influence,. No longer subjected to his mother’s guidance, his life may go well, or not, as a weaving may or may not go smoothly. A broken warp thread or a delay in the weaving signify difficulties that cross his path.

I like the analogy between the progress in the weaving and the journey through life, the notion that the weaving itself is a story. And I love the idea of breathing life into it, giving it a soul, an essence. Though to me, breathing life into a textile I weave is not a sharp transition, but a process that starts with the first row of weaving and culminates when I cut it off the loom.

I also learned that in Islam, death is not an end, period. Death is merely the end of the beginning, or the beginning of the end, depending on the viewpoint—it is just another transition into another phase in the human existence, into the afterlife.

As long as I can remember, I’ve seen textiles as live entities with a story to tell. But I never thought of the act of weaving as a story in itself. When a warp thread snapped, I sighed and fixed it, and when I was unable to progress as quickly as I had hoped, I huffed in frustration.

My weaving enriches my life, but as a contemporary weaver, I have no rich traditions of my own to draw from. Instead I live vicariously through others’ traditions. I delight in stories about indigenous weavers, of Bedouin weavers in the Sinai Desert, of backstrap weavers by Lake Atitlan in Guatemala, and of silk weavers in Gujarat, India.

When I sit at the loom, immersed in a rhythm of throwing the shuttle back and forth, I daydream of weavers across time and space, sitting at their own looms, advancing row by row, creating beauty. Now, I’ll also daydream of Berber mothers telling their sons’ stories through weaving.