As I crossed the threshold into the hospital my inner voice chanted, “Dead man walking.”
Did I actually say it out loud?
During the early days after the bleeds and surgeries, I relied on my sense of humor to keep me sane.
Right after I set dates for the first two surgeries, I phoned Cindy. I was shaking, my heartbeat deafening. Through a thick fog, I heard a quavering voice telling her the news. And the world came to a standstill. The silence was suffocating.
A lifetime later I heard myself whisper, “I’m freaking out.”
I could hear the terror in her response, “Me too.”
But once we got over that initial shock, we got to work, addressing our fear with humor. We initiated a list of things you don’t want to hear your neurosurgeon say. They ranged from “Oops!” to “Do you remember how they did it on Grey’s Anatomy?”
As Dr. Gina Barreca wrote in a Psychology Today article, “We can use humor to put our fears into perspective. Humor addresses the same issues as fear, not to dismiss them, but to strengthen our ability to confront them and then laugh them away from the door.” 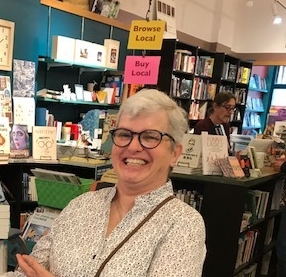 Much of the time, jokes and laughter were within reach, to manage my struggles with grief and despair, anxiety and fear. When I my balance and vertigo were so bad that I had to retire, stumbling, to my bedroom, I told Cindy that the waaves were getting higher and this ship was going down. And when an acquaintance told me, “You look good.” I chuckled. “You don’t look so bad yourself.”
Most laughed with me. Some smiled weakly and others weren’t sure how to react.
But sometimes the jokes dried up.
At times, depression or terror invaded my entire being. And there was no inner laughter to be found. But every time that happened, with a little help from my friends, I rediscovered it, usually within minutes or hours. In the absolute worst case, it took a fortnight.
The first two brain surgeries, to remove the angiomas that had bled, were planned, and I had plenty of time to sure up my defenses. But the third surgery, an emergency, was different. The numbness from the shock lasted longer and my sense humor failed me—I was no longer the one who initiated the jokes. This time, I had to rely on my support team to come to my rescue. At first, I responded with a weak smile, but as they persevered, the chuckles and then laughter became more genuine, and I emerged from the numbness.
To this day, I occasionally contend with depression and fear, and the norm is that within minutes, the laughter returns. Humor has helped me immeasurably through my life with brain injury.
Just a few days ago, I was on the phone to a fellow survivor who recently underwent brain surgery. We were discussing our various deficits, the serious parts interspersed with jokes. Talking to him, I realized—he’s not a victim. In fact, I expect him do more than survive—he’ll thrive. Within the foreseeable future.
Living a full life with a brain injury, or any other scary condition, has to come with laughter. Ultimately it’s about thriving, not only surviving.