It was my son’s idea to add bonus problems to my tests. “Have them draw an octopus. That’s what one of my professors had us do.” 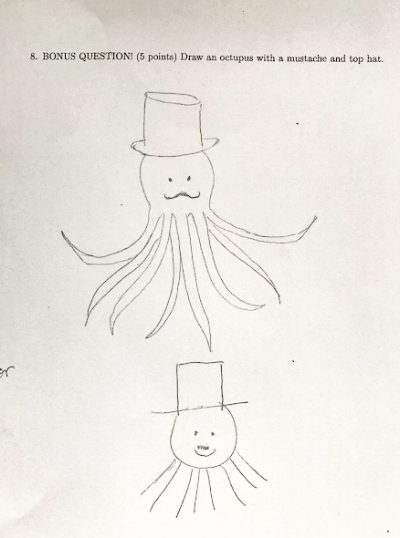 I loved the idea—the students, many of whom are subject to math anxiety, could use some comic relief during the test. I added a problem: “Draw a picture of an octopus with a fake mustache and a top hat.”
Students have different test-taking strategies. Some read through all the problems before they start tackling them, others start at the beginning and keep going, skipping over harder problems and come back to them later, as time permits. Occasionally, a student gets stuck on a problem but for some reason has difficulty moving on.
The bonus problem was the last one on the test. I didn’t mention it to the students—I wanted to see their reactions when they reached it.
After I gave the okay, all nervous chatter and laughter ceased as heads bent over the papers. Only a couple of students (out of fifty some) chuckled within the first few minutes—were they the only ones to skim through the entire test before starting to tackle the problems? As time wore on, every so often I’d hear a chuckle or I’d see a students raise their head to catch my eye and smile.
At one point I announced to the class that if they do get stuck on a problem, they should skip over it and riffle through the pages and work on a problem they feel more confident solving. For a while after my suggestion, the frequency of the smiles increased.
When my teaching assistant and I sat down to grade the tests, the drawings provided comic relief from the onerous task.
All but one student surpassed me in their artistic talent—have you ever seen a stick-figure-octopus?
Another student drew a shapeless blob on the octopus’s head. “I guess he didn’t know what a top hat was.”
Several students drew less than eight tentacles. The teaching assistant laughed out loud. “Should I take off one point or two?”
Since then, I’ve added a bonus problem on every test and final exam I’ve administered. Some more creative than others, from listing names beginning with the latter s to writing their favorite number and explaining their answer.
Every so often, we have theme days, with a photo op after class. We’ve held Sock Day, Hat Day, Crazy Hair Day and many more. The favorites seem to be Fake Mustache Day and Balloon Day. One of the bonus problems was to come up with idea for theme days.
Another source of ideas for bonus problems is my grand-dog, Gus. All of my students have met him, and they all seem to enjoy him. On one test I asked them to describe Gus’s personality. And on another I asked, “What is Gus’s role in the course?”
It’s time to put together the first test of the semester. I’m set for a bonus problem, but I can’t compromise the integrity of the test—I won’t divulge any additional information.