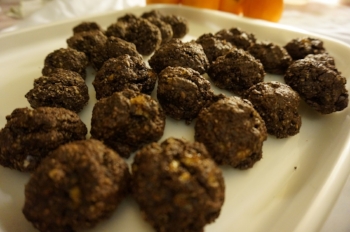 I thanked Joan profusely, the cookies looked so good. I was also hungry. Also she went through all that trouble.
I was particularly intrigued by the spherical brown ones. Mum and I used to make ones that looked exactly the same, made of cocoa, flour, and sugar. Sometimes we added walnuts to the mix—tum!. They never lasted long in our household. I couldn’t wait to try one of Joan’s.
As soon as she left, I attacked the saran wrap that covered the plate. It put up a decent fight, but determined, I won.
I raised the largest cookie to my mouth. As I bit into it, my eyes closed in anticipation. My teeth sank into it. The texture was wonderful, somewher between shortbread and—
My eyes flew open and my jaw froze—rubber? More rubber than crumble. And the taste… Yech! Bland with a hint of bitterness. Actually, more than a hint, quite a bit more.
Was she trying to poison me?
I spat it out. I briefly thought of trying another cookie to get rid of the taste. What about one that looked like a snicker-doodle? But realized that perhaps it wasn’t a good idea. Instead, I reached for my water bottle and rinsed my mouth out with water.
After I got over the initial shock, my mind started roaming. Spherical and rubbery—if I dropped one on a hard surface, would it bounce or splat? I was sitting at my desk. The floor was carpeted. Hmmm… It had better be the desk.
I cleared away some space, took a quick look into the hallway—would witnesses be a good thing, or a bad thing? It was a moot point—there was no one there.
I picked out the most regularly shaped spherical cookies and dropped it onto the desk.
It bounced. Not high, but it was definitely a bounce.
And then it splatted.