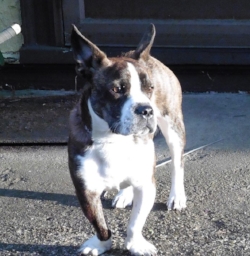 On days when I feel lonely, or sad, Gus always manages to raise a chuckle. When the bloody brain is being hard on me, he settles by my side, touching, sometimes resting his head on my shoulder, his warm (and not too stinky) breath brushing against my cheek.
He wakes me up in the morning by cleaning my face. If I am still reluctant to get up, he talks to me. He whines and howls, and growls. 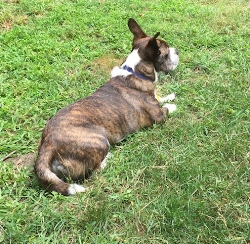 And if that doesn’t work, he lays on my bladder, a tactic that never fails.
He loves to play, sometimes wrestling before we get up in the morning, or playing hide-and-seek under the covers in the evening. But he especially loves playing outside. Fetch and keep-away are his favorite games. He often tries to trick me into a game tug-of-war, tempting me by repeatedly pressing the squeaker in his toys.
On sunny days, he just enjoys lying in the sun. Like Ferdinand the bull, he’s at peace. He lifts his nose to breathe in the aromas. He cocks his head and swivels his ears to listen to even the softest of sounds. He takes in the world around him with bright eyes. Every so often he gets up to investigate further, a bee buzzing among the flowers, a rabbit nibbling on the grass, a rustling in the bushes. 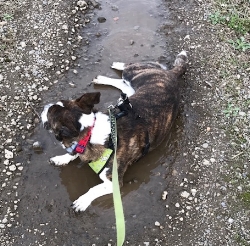 Every walk is an adventure. Especially when there are other dogs about. He pleads and barks and pulls. He wants to play. When the other dogs and owners are agreeable, life is good. If he had his way, he would play all day. But when I have to pull away, the pleading and crying go on for a good few minutes, until he becomes distracted by another dog, a pile of poop, a jogger, a bird, a puddle.
He has a particular fondness for puddles. He has a knack for finding them, and he has to walk through every single one, usually flopping down into them, no matter the outdoor temperature. 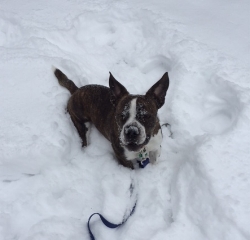 Snow days are a particular treat, a time to celebrate–chasing snow balls, digging for sticks in the snow, only breaking for a bout of excited pattern running.
He lives in the present. Bringing out the joy in the moment.