I started my day sitting outside in the shade, typing on my laptop, working on an essay about one of my experiences in the Old City in Jerusalem.
It was a lovely morning. The skies infinite, the temperature gentle, a mere hint of the heat to come.
As my fingers danced on the keyboard, I occasionally smiled. Like all my times roaming through the souk in the Arab Quarter, it was a fond memory. 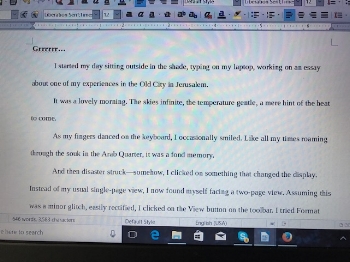 And then disaster struck—somehow, I clicked on something that changed the display. Instead of my usual single-page view, I now found myself facing a two-page view. Assuming this was a minor glitch, easily rectified, I clicked on the View button on the toolbar. I tried Format and then Tools, anything that included the words options or display, but nothing looked promising.
Still calm, I decided to search for a solution on the internet. I discovered that I needed to search for Page Preview. But the only thing I found was how to get a double-page display, on an older version of LibreOffice. This was the first time the LibreOffice help site failed to help—I started becoming agitated.
I wasn’t sure what prompted me to check another document I’d been working on—when I clicked on it, I found that it too had changed its display style. I tried a completely unrelated document, from a different folder. It too was modified. After taking a few deep breaths, I turned back to Google—no matter what I tried, Page Display, Page Preview, Single-Page Preview, nothing helpful showed up.
Now, I was frustrated. I contacted my friend, Judy, to whom I had turned to in the past when my word processor misbehaved. I didn’t have to wait long for her response.
I followed her instructions, which quickly led to a dead end—we were using different versions of LibreOffice. Frustration started transitioning into anger. And when I tried her next suggestion, I had to pause to force myself to unclench my fists so I could continue in my attempts to correct the wrong.
That’s when I realized that really, working with a two-page layout wouldn’t be the end of the world. I could certainly continue writing and deal with the issue later. But almost as soon as the thought popped into my head, I squashed it. No! I wasn’t going to let this stupid program beat me!
I checked my email again—Judy had come up with another idea. I’d already tried it, to no. Now I clenched my jaw as my anger escalated.
My state of mind won over reason—I started clicking on buttons and icons, not quite randomly, not quite violently— It worked!
Finally, only one page showed up on the display. Why—How—
Instead of rejoicing or feeling relieved, now I felt like punching something and/or slamming doors.
Wait! What was going on? I shouldn’t have been this upset. Frustrated, yes. But once I resolved the issue, I should have been fine. My negative emotions shouldn’t be lingering like this.
I wondered whether this was bloody brain related rage—that wouldn’t be good news. I hadn’t experienced that kind of anger in a few years. Yes, I’d been pushing myself too hard lately. And yes, I’d become more fragile, more easily prone to sensory overload, exhausted too much of the day, but still… rage?
I shrugged it off, there was no point in worrying about the reason. It was more important to try to clam down, at least I was better equipped to manage my moods than I used to be.
I took a few deep breaths. Writing! That’d help—I’d write about it.
And I am, and I feel much better—no traces of anger left whatsoever.
But why on Earth did I react so strongly? A bad brain day?
Or just me being a twit?