When did I start suspecting? Was it when there was no talk of discharging me? Or when I felt the atmosphere change? 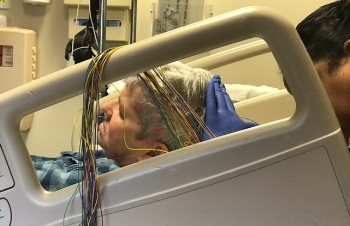 Setting Up For a Long Haul
One of the technicians who before I experienced a series of convulsions seemed to enjoy hanging out with me and my visitors, now, whenever she came in, she spoke of stress, that I needed to relax. She told me that I was too highly strung, that when I ate I was hunched over. I wasn’t sure what she was referring to, but then realized that sitting up in bed, reading as I ate, I probably was hunched over the book. I certainly didn’t feel stressed while I was there. Sleep deprived, but not stressed. Bored, but not stressed. In fact, when I wasn’t bored, I was enjoying myself—plenty of time to read, having fun hanging out with some of the medical people, enjoying my visitors.
Another EEG technician, who was in my room during the convulsions, left without a word after they were over, and never stopped by again. She’d been so nice when I first arrived in the Epilepsy Monitoring Unit. The other one who was there, became impatient with me when she had to tend to the electrodes stuck to my scalp.
After I noticed a shift in their attitude and start wondering about whether it was a non-epileptic seizure (NES), I asked those who’d witnessed it what the EEG showed. They were evasive.
I wasn’t convinced when the nurse responded with, “I don’t know anything about EEGs.”
But when EEG technician said, “Oh, I wasn’t watching the monitor. I was busy taking notes.” I knew she was lying—she’d been watching the monitor. The other technician had been taking notes.
The attending neurologist’s reaction to my query about getting out of there within five days heightened my suspicions. “I don’t want to jump to any conclusions at his point. Sometimes, when we think we’re ready to make a diagnosis, something happens that completely invalidates it.”
For some reason, I didn’t catch his answer to my blunt query about whether my convulsions were NES. Did he even respond?
After three nights of sleep deprivation and five days’ worth of grime, which no sponge bath could remedy, I’d had enough—I didn’t care anymore about the diagnosis.
When the neurologist came in for the last time, I could tell—she was hesitant coming in the door, her manner was a little too solicitous. There was no semblance of brusqueness so characteristic of hospital doctors. I knew the protocol. When breaking the news to a patient that their seizures are NES, probably psychogenic (PNES), the doctor should be careful. (Pychogenic seizures are brought on by psychological issues such as stress or trauma.)
According to the Epilepsy Foundation (http://www.epilepsy.com): “Understandably, many patients’ first reactions upon hearing they have PNES, and not epilepsy, is one of disbelief, denial and confusion. That is because mental health issues come with highly stigmatized labels…”
Having faced a doctor who diagnosed me as having PNES nine plus years ago, I’ve already dealt with the “disbelief, denial and confusion.” I was now able to accept the diagnosis. In fact, having done some soul searching when my suspicions gained momentum, I realized that I’d be happy with news that my seizures were NES—it would be one less issue to worry about. Also, the possibility that I could cut back on my anti-seizure med was very attractive to me. Perhaps they were stress related—between the ax over my head I referred to as the Bloody Brain, work, and family, I experienced plenty of stress. Maybe PTSD was a culprit—between the brain bleeds and subsequent surgeries, and a couple of other traumatic incidents in my life…
The neurologist danced around the issue. “We know you have angiomas. We counted them… When they bleed it’s just a spot of blood, not much at all. There’s no real reason to worry.”
Hoping to speed her up, I tried to smile at her reassuringly, but to no avail. Impatient, I tried interrupting her. “So they’re not epileptogenic?” But she wouldn’t engage. She had to go through the complete spiel. “There’s no point in worrying all the time anyway.”
Eventually, she showed signs of getting to the point. “On the right, where you had the surgeries, the brain activity is different than the rest of your brain. More erratic. But that’s your baseline. Compared to that, the EEG exhibited no abnormal brain activity throughout your time here. Which leads us to believe that they were psychogenic seizures.”
I beamed—finally, a definitive diagnosis.