Come morning of my last day at The Epilepsy Monitoring Unit, I was raring to go.
My past hospital discharges led me to believe it would take the entire morning, if not well into the afternoon. But to my surprise, the first nurse in the door, freed me of the blood pressure and heart monitors, and within the hour, an EEG technician came by to disconnect me for the EEG machine. As she worked to dissolve and scrub the glue off my scalp and hair, now jubilant over my upcoming freedom from confinement, I had to force myself to sit still. On her announcement that she was finished, I could feel myself beaming. A few minutes later, another nurse remove the IV from my arm.
I had trouble containing my joy when she broke the news that I could now take a shower—I’d fully expected to wait until I got back home. It was pure heaven. I shampooed, then again, and a third time, scrubbing and scrubbing my scalp. I washed and rinsed, and washed again—I wanted to remove as much as possible of the stench of my stay in hospital. I gleefully replaced my pajama pants with a pair of jeans, and my hospital gown with a civilian shirt.
Running a comb through my hair, I found some remaining glue debris. I combed three more times before I gave up—I could still feel the odd clump here and there—it would have to wait until I got home. Nothing could squash me now—I was on my way out the door.
On my way back to my room, I stopped at the nurses’ station. “Did I miss the doctor while I was in the shower?”
I released a breath I hadn’t realized I was holding when I learnt that I had not missed her. Clearly as eager as I was to part ways, a nurse trotted off to find her and another started processing my discharge.
By the time I packed up my remaining belongings the doctor and her intern came in.
The intern treated me as he had throughout my stay, with casual friendliness and mild curiosity. The doctor, who was new to me, seemed solicitous, perhaps overly so—the seizures weren’t epileptogenic, and afraid I’d react badly, she wanted to break it to me gently. I tried to reassure her with a smile.
Her voice was soft. “After looking at all the data, we have a pretty good idea of what’s going on—”
I interrupted her. “So they weren’t epileptic seizures…”
Clearly she was going to take a while, I already knew the answer, and I wanted to get out of there.
She shifted in her seat. “Well… you didn’t exhibit any abnormal brain activity—”
“So they’re psychogenic?” I understood her difficulty, but enough was enough.
“Well… They’re NES, which stands for—”
“Non-epileptic seizures.” 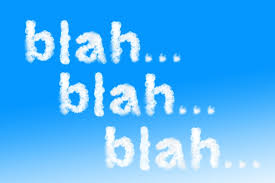 https://pixabay.com/en/yada-yada-phrase-formula-222767/
She corrected me gently, “We now refer to them as non-epileptic spells—”
“So psychogenic…”
But she wasn’t going to let me hurry her along. She leaned forward. “There are different names for them: psychogenic, pseudo-seizures… I personally don’t like that term because it implies that they aren’t real…”
She went on about how they are stress related and that I should see a therapist, etc. etc. Blah blah blah. I’d heard all this before–I got the point. My hackles rose a bit when she started expanding on the nature of angiomas—I knew quite a bit more than she did, and some of her information was downright wrong.
Having researched psychogenic seizures, I was fully aware that she was using the standard approach—for whatever reason, some patients at some level want the diagnosis of epilepsy, and don’t react well to news to the contrary. Though I knew that she was doing her best, and was sympathetic towards her, my patience was fast running low—she wasn’t listening to me, I was glad about the diagnosis and I was already in therapy.
Eventually, she wound down and stood up to leave. On her way out the door, she once more strongly encouraged me to look into undergoing Cognitive Behavior Therapy.
Shortly after her departure, a nurse handed me my discharge papers. “Do you want a wheelchair?”
I vehemently shook my head, collected my bags, and practically ran out of there.
I strode out of hospital with a goofy grin on my face.