“A tiny pinch.” she said as she brandished the long syringe.
Yeah, right. A tiny pinch, my arse—a lousy description. I’ve been pinched in the past, poking a needle into my arm didn’t feel like that, not by any stretch of the imagination. But, here, in Pittsburgh, nurses always describe a shot as a pinch.
When I was in hospital for my brain surgeries, they referred to it as a “poke,” which at the time seemed like a better word to describe it. But now that I’ve had time to think about it (almost ten years), the word “poke” doesn’t cut it either.
When my children got their vaccinations, the nurses always told them it would feel like a pinch and that it wouldn’t hurt. Wanting the kids to trust me, I contradicted the nurses. “It will hurt, but only for a split second.”
I was in hospital recently. Whenever a nurse drew blood from my arm, put in an IV, or gave me a shot, they used the word “pinch.”
I objected. “It doesn’t feel anything like a pinch.” 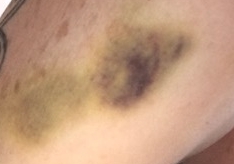 Most chuckled, but one actually thought about it and agreed with me. Asking for an alternate suggestion, I came up with the word “sting.”
If I were describing the experience to a child, I would definitely describe it as a momentary sting.
Yup, a sting, sometimes a really nasty one.