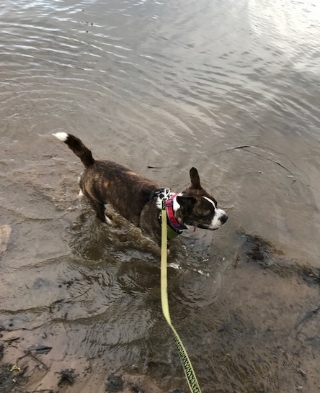 Five days in hospital, confined to my bed, left me weak. I felt achy as I climbed stairs. I struggled to get through lecture. Playing with Gus left me light-headed. It took me four days before I felt ready to take Gus for a walk.
He was beyond excited, sniffing all over the place. pulling me from one trail to the next, first along the railroad tracks, then down the hill to the street, through a tunnel that goes under the tracks over to the housing envelopment by the river, and finally to the trail along the water.
So intent on the smells around him, he didn’t see the rabbit who tried to taunt him by hopping away in a plain sight. He showed very little interest in the beaver who crossed our path to make his way down to the creek. He barely glanced at the blue jay who landed and took off right under our noses. Even the second beaver we encountered only led to a brief pause on Gus’s way to his destination–the river.
I should have known, Mr. I-hate-baths loved natural bodies of water, from muddy puddles and ponds to wide rivers and lakes.
As soon as he spied the water, he leapt ahead, pulling harder on the leash. He plowed in, turned towards me, and lay down. No. it wasn’t hot out, just pleasantly warm and sunny. 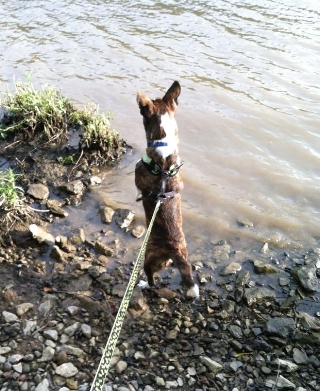 He lay there, his ears perked up, gazing at the ripples, luxuriating. Then he jumped up and continued exploring along the shoreline, every so often attempting to pull me in after him.
Growing tired of that particular stretch, he trotted onto dry land, shook himself, and rushed over to his next stop–downriver to a landing we visited a couple of times in the past. Once again he plowed right into the water and lay down in it, smiling,  his tongue lolling. This time, he was ready to return to the path after a brief paddle.
Only after his third dip, further along, was he ready to return home. Both tired, Gus still wet, we made our way back at a leisurely pace.
Still on his leash I led him upstairs to take a bath.
Ears back, looking forlorn, he stood in the water, unwilling to sit, let alone lie down.