After the first, I listen for the second, and the third. That’s the norm—three. I’ve never heard just two or one, I’ve heard four only twice, and I have never heard more. This time, when I heard the first, I was puzzled. It was shorter than usual, and the second didn’t come. I looked behind me. Nope, the crossing was far, too far for the train to be whistling.
Walking along the railroad tracks with Gus is always an adventure, there’s always something new to investigate, not just new smells for Gus, but also new things for me. A rabbit hopping ahead of us, not jumping into the bushes bordering the path. A beaver on his way down to the creek, a blue jay landing and taking off. A flower I’ve never seen before. Trees changing with the seasons. 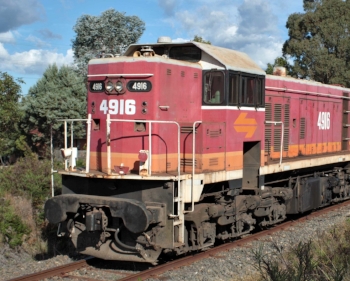 https://en.wikipedia.org/wiki/File:Locomotive_4916_Thirlmere.jpg
There’s always something new.
This time, it was the train. Well, not the train, but its horn. Gus paused, and looked back at me. Was he also puzzled? Or just anxious because of the loud noise?
I looked up at the locomotive, then glanced around me. Was the engineer waving at me? I’d never been tooted at by a train. By a truck, yes, when I was young. But never by a train.
He was waving and smiling. I grinned back at him as I waved.
Wait! Was that his version of a wolf-whistle? I looked down at my camo pants and thought of my gray hair. Nope. Not a wolf whistle.
I smiled at Gus and shrugged—
And realized that he was waving at Gus. Perhaps us. No, it must have been Gus. Or us.
Gus trotted on. And I followed, beaming—I’d never been whistled at by a train.