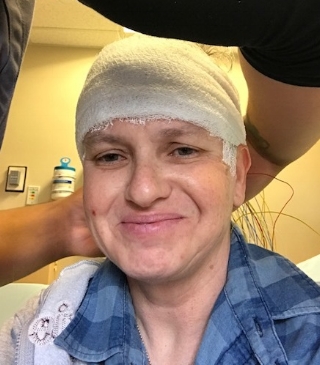 Still smiling
The pre-hospitalization packet said three to five days.
Upon arrival at the EMU (Epilepsy Monitoring Unit), the nurse clarified: three to five days on average. A minimum of three, possibly more than five—it depended on how successful they were in inducing seizures. Possibly more?!
Mid-afternoon, the attending neurologist stopped by and dropped the next bomb—they might want to keep me seven days, possibly more. I couldn’t, I wouldn’t. Five days were bad enough, but more— No. I couldn’t.
“You can always leave before that. Even if we don’t manage to come to any definitive diagnosis. We can’t stop you.”
I didn’t hesitate. “Three days! That’s it!”
His eyebrows shot up. He managed to convinced me to allow for five days. “We might be able to let you go sooner.”
I could but hope.
Mid-morning my second day, I experience a seizure which included mega-convulsions. Instead of being afraid, I was thrilled—they’d let me out early. But apparently they felt it didnt provide sufficient data for them to come to a conclusion.
My hair stiff with glue the technician used to attach the electrodes to my scalp, unable to rest my head on the pillow comfortably for fear of displacing the electrodes, I slept poorly through the first night. 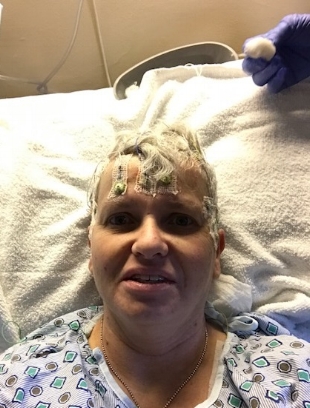 Removing electrodes
At first, I managed to ignore the fact that I was being watched via a TV monitor. But by the afternoon it started to bug me. I took every opportunity to escape to the only place free of cameras—the bathroom.
I took my time on the toilet. When I washed my hands, I scrubbed and rinsed and rinsed and rinsed some more. I’ve never spent that much time brushing my teeth, and my daily sponge bath was lengthy as well.
Though I tried to keep myself busy—reading, writing, playing a computer game (“Monty Python’s The Ministry of Silly Walks”), scrolling through Facebook, I was bored, really bored. I often I found myself trying to peel the glue off my earlobes and pull it out of clumps of hair that escaped the dense forest of wires.
Five days. Five long days. Even though I had plenty of visitors to help me while away the time. Two to three of those days they sleep deprived me. “Stressing your body and brain will increase the chances of having a seizure.”
By the third day, I was yearning to leave. I was beyond exhausted. My head was getting itchier and itchier. Knowing that I was being watched throughout was creeping me out more and more.
Finally, the fifth morning arrived. Removing the heart monitor was the first step towards freedom. I was excited when the EEG technician stopped by to remove the electrodes. She kept apologizing when the stuff she rubbed into my scalp sometimes stung. “The electrodes caused some skin breakdown.”
I didn’t care. Next it was time for a shower. Attempting to remove the remnants of the glue, I shampooed once and then a second time, scrubbing and massaging, and scrubbing some more. 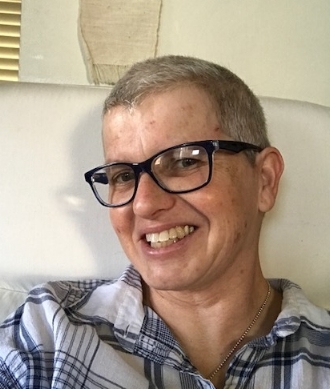 Free
I got home around lunchtime. My first priority was to remove the stench of my hospital stay. Another shower was in order—another couple of shampoos. But some stubborn bits of glue still clung to my hair.
The next stop was the hairdresser. “Just buzz it. Get rid of it. If you see any more bits, please pull them out. I can’t stand it.”
She complimented me on my new look. Though I thanked her, I really didn’t care. I was just happy to have finally have eliminated all the evidence.
“Would you like a shampoo? I’ll use some cleansing shampoo.”
Even better—I nodded vehemently.
Two shampoos later, and I finally felt free, free of doctors, nurses, hospital food, hospital gowns, everything hospital, free to move on, free to get back to normal life, free.
This morning, four days after I was freed from hospital, I picked out yet another clump of glue. It was small, but still…
Ugh. I hope it’s the last.