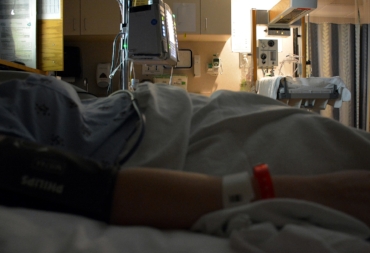 http://www.publicdomainpictures.net/view-image.php?image=168252&picture=patient-in-hospital-room
About a week to go. Am I anxious? Maybe. A bit. Yes, I’m anxious. About what? The procedure? No. Not really. It’s way in the future. Abstract. It’s not real to me. Like the third surgery.
Throughout the process of draining my CSF (Cerebral Spinal Fluid), before the third brain surgery, I thought they were fussing. Yes, I had a leak from the site of the brain-stem surgery. Yes, it made sense for them to drain fluid away from the site of the leak to promote self-healing. And of course, it would be best to avoid a third surgery to patch up the leak. It all made sense, theoretically.
In my mind, I knew that all this fussing was unnecessary. The connection between cause and effect just didn’t exist as far as I was concerned. I knew neither would happen, neither self-healing, nor a third surgery, and that was that. No need for concern.
It didn’t occur to me that my thought process was flawed. To me, reasoning was irrelevant. There were just facts—the lumbar drain wouldn’t do the trick, and a third surgery would never happen.
Whenever the neurosurgeon stopped by my room in the ICU to ask whether I still had salty fluid dripping down the back of my throat, I swallowed experimentally then nodded. But a niggling little voice questioned: was I merely imagining it? Perhaps it was due to allergies, or a cold. Was I just seeking attention?
Three days after they started the lumbar drain, the neurosurgeon walked in the door and announced, “Another surgery. Tomorrow.” The drain wasn’t doing the trick.
I was in shock. It didn’t make sense. I wasn’t meant to have a third surgery. This shouldn’t be happening. It was wrong.
I was still confused by this whole cause-and-effect thing. I still was unsure about everything that led up to the third surgery. Is this really happening? Or am I imagined it? It felt like a story about someone else, a stranger.
After the surgery, I learnt they discovered a “suspicious looking mastoid” as the neurosurgeon put it. When he told me they’d plugged up the leak, I was still filled with doubt. I occasionally swallowed, expecting salty taste, but there was no question—it was gone. I still wasn’t totally reassured. The neurosurgeon had said “suspicious looking.” Perhaps they hadn’t really found anything. Perhaps I’d undergone a third brain surgery for no good reason—because I’d been messing around looking for more attention. Perhaps I’m a complete fraud.
Even though I now know it’s a fact that the third surgery was necessary and deep down I believe there was a leak, that little voice speaks up occasionally, casting doubt over every aspect of the bloody brain, past and present, including the leak.
And here I am, nine years post-surgeries, once more, doing the same thing. This time, over possible seizures. Am I over-dramatizing? Were those incidents truly seizures? Or had I imagined them? Am I an attention seeker?
When I go to the epilepsy monitoring unit, will I be exposed as an impostor? Why am I putting myself through this? A three to five days’ hospital stay, including sleep deprivation, trying to induce a seizure. Just to find the source of the seizures, possibly to mess with my meds. They’ll find me out for the fraud that I am. I probably haven’t been experiencing true seizures. It’s just my fertile, sick, imagination. Those bright flashes of light—if they were really there, could easily be symptomatic of migraines. The sudden fatigue, my body feeling so heavy, just like those seizures back then. But even back then, within the first several years after the bleeds, the doctors had questioned the nature of these neurological event. On the other, other brain injury survivors have reported strikingly similar events.
Why am I doing this to myself? Even if they do detect seizures, so what? I’ve already given up my drivers license—there’s no doubt that I have experienced seizures in the past, and I’m definitely at high risk for seizures. I wanted to do the responsible thing.
Could I still be searching for validation for the bloody brain? After all these years?