My head was shaking side to side. I couldn’t control it. Every time it turned towards my right, I almost slammed into the phone I was holding up to my ear. Why was the phone there? Should it— Before I finished the thought my head turned to the left. Back and forth on the pillow, phone, no phone, right to left. Grunting. Like an animal. Who? Me?
“Deb! Deb! You okay? Are you having a seizure?”
Oh, I was having a seizure. Thick, viscous, disgusting mucous oozing down my chin onto my hospital gown. And the phone, stuck to my hand. Shouldn’t I be doing something with it? Why was it still in my hand?
I was shaking, drooling. A grand-mal seizure. In hospital, after my first brain surgery.
I couldn’t have a seizure! I had one more brain surgery to go. They might decide I shouldn’t undergo the next one. I couldn’t wait another six months for the second surgery.
It had only been hours since the first brain surgery, maybe a day. And I was experiencing a grand-mal seizure. A very odd sensation. The shaking I couldn’t control, the animal noises… Why couldn’t I control it? Why was my body not my own?
I was on the phone to Cindy, the phone attached to me, to my hand. She suggested I was experiencing a seizure. A seizure?! No, no! I couldn’t have a seizure now! If the surgeon found out about it, he might refuse to perform the second surgery. He said that if the first went well, he’d do the second a day later. If not, they’d have to wait six months.
I couldn’t wait another six months! I needed to get this over with. I have to start rebuilding as soon as possible, reclaiming my place in the world, getting back to normal. 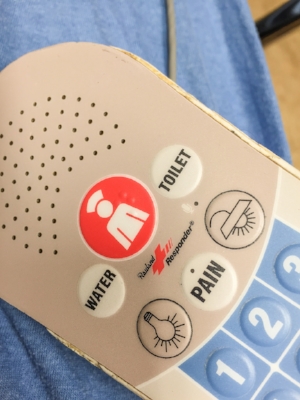 https://www.flickr.com/photos/diversey/17238701230
My life as it had been over the past few months, since the bleeds, wasn’t much of a life. It was no more than an existence, putting one step in front of the other. My entire life revolved around the bloody brain, surviving obstacles it kept throwing my way, hour by hour, day by day. I wanted move on. I needed to move on.
I heard myself swearing into the phone: “Shit, shit, shit, shit!”
Cindy chuckled. But it wasn’t funny.
The saliva was repulsive, soaking my hospital gown. Thick and sticky. Coating the flimsy gown with a layer of glistening slime. I recoiled when my finger brushed against with it. So revolting, beyond revolting.
Cindy insisted I press the call button to call a nurse to report the seizure. All I could think of was about my next surgery, and the slime. I couldn’t stand it. My chin was coated with it, as was my gown. If I’d only worn a bib.
She asked me to hang up the phone so she could alert the nurses. I wasn’t sure how to do that. The phone was still glued to my hand, a fact I was incapable of processing. Cindy repeated her request several times before I was able to figure it out.
My next memory was of medical personnel swarming around me. They seemed skeptical that I’d suffered a seizure.
Perhaps the nurse who’d been monitoring me through a window, from the hallway, hadn’t noticed anything. How could he have not noticed? He’d seemed so nice when I met him earlier. His name was Brian and was from Scotland. Or was it England? Or Ireland?
I pointed to the saliva, glistening on my chin, soaking my gown—their skepticism evaporated.
They sprang into action, rushing to and fro. Did they take me for an EEG? Or did they administer it right then and there? I couldn’t make sense of my surroundings. What they said, what they did, was irrelevant—my anxiety over the second surgery reigned consumed my all.
A lifetime later, my neurosurgeon made his rounds, checking on his patients, checking on me. “How do you feel?”
“Fine.”
“So it’s a go tomorrow?”
I nodded. “It’s a go.”
He smiled and patted my leg.
I was going to be all right.