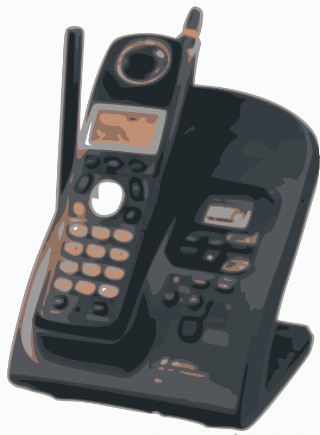 http://www.freestockphotos.biz/stockphoto/14398
I felt woozy, confused. Rather than fear, I was filled with a vague sense of puzzlement. Wisps of unfinished thoughts wafted by, out of reach. I finally managed to snag one—Cindy might be able to figure it out.
After a few failed attempts to phone her, I got her on the phone.
I spoke softly, haltingly. Her voice sounded as if it was coming from a distance. I had trouble understanding her. “What’s going on?”
“I… I don’t know. Feel weird. Something’s wrong. Can’t figure it out.” My voice softened further, I felt so very tired, my body felt impossibly heavy. My difficulties accessing words and thoughts grew. I kept repeating myself. “Something’s wrong. I don’t understand.”
Cindy was asking me questions from a great distance. But I couldn’t answer. My words were too weak to surface, they floated uselessly inside me.
I toppled off the coffee table in what seemed like slow-motion, the phone in my hand. I landed on the rug, the phone on the floor beside me. That seemed odd. I felt fuzzy, as if I was in a fog, and serenity replaced my puzzlement. The rug was soft. It came into sharp focus—it looked like it was made of pebbles, off white with flecks of brown. Each bump sprang rusty colored whiskers. It intrigued me in a hazy way.
I wanted to lie there forever, contemplating the texture. I felt comfortable as I had never felt before.
Actually, it wasn’t that comfortable. The texture was, in fact, harsh, scratchy. The pebbles were digging into me, probably making marks on my cheeks. And why was the phone on the floor? It didn’t belong there.
I got it up and placed it on the cradle. And promptly forgot the incident, as if it had never happened.
Cindy told me later that she thought I’d experienced a seizure. At the time, I didn’t quite believe her. Why would I have a seizure?
She’d called Bill, my now ex-husband to alert him. But when he came home and asked me about it, I shrugged, embarrassed. I had a vague memory of collapsing. But I was now fine, no reason to worry.
Only later, when my head exploded into a headache such as I’d never experience, much worse than any migraine I’d ever suffered, did I make the connection. Whatever it was that had taken place earlier was a symptom of a brain bleed.
But the notion that that event was a seizure totally escaped me, until a couple of weeks later, when I started experiencing them on a regular basis. And even then, I wasn’t completely convinced—only occasionally, when something triggered a fleeting memory of the incident, which seemed irrelevant, uninteresting, certainly not worthy of exploring.
Though now I’m pretty sure it was a seizure, a niggling little voice inside me questions it. Perhaps I was over-dramatizing. Maybe I was just really tired. But it was really weird. Could it have been a seizure after all?