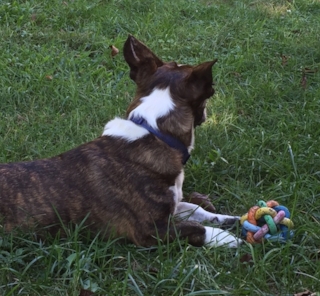 I wind up and let it go. As it starts its flight across the room, Gus gallops over, his tail streaming behind him like a banner, with me chasing him at a jog. He rushes to snag the stuffed toy raccoon with his teeth, waits for me to catch up, then turns and runs back towards the dining room, every so often turning to make sure I’m still following him.
When he reaches the dining room he gives me one more smile, then trots off into the kitchen. I catch up and clumsily grab at the toy. He turns, tail wagging, and runs back into the dining room, where he waits for me to begin the next phase in the game—tug of war.
On my first try at grabbing for the toy, he pretends to be fierce—holding on for dear life. When I give up and let go, he drops it at my feet and places a foot on it. As soon as I make a move towards it he snatches it up, but when I take hold of it, he lets me drag it out of his mouth, so that I can throw it for him, once again.
We keep it up until either I start flagging and stop cooperating, or he gets bored and lies on the floor to chew on it.
Whenever we play, we make up the rules as we go. We each catch on quickly as the rules change, usually within two demonstrations.
We’re both pretty smart.