I told my hair dresser, Gaye. “I’d like a really really short buzzcut in preparation for the surgeries.”
Gaye seemed puzzled. “But why?”
“I don’t want the crop circle look.”
She nodded. Her son had been through several brain surgeries, and before each one, she shaved his head for him, for the same reasons. She asked me why I didn’t want a full shave. 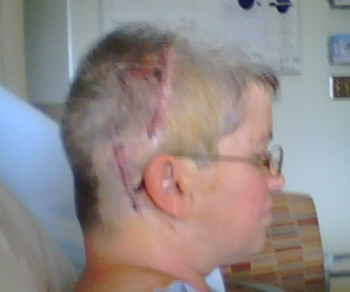 “My daughter freaked out when I told her. We compromised on a short buzz cut.”
She nodded again. “I can make it really short and still give it style.”
And she did. It was as close to bald as anyone could get without actually shaving it. Yet it had style—she applied the clippers everywhere except a narrow strip in the front, and used her scissors to give it subtle shape that accentuated my widow’s peak. I loved how it looked, and how it felt.
A few years ago, I revisited the inpatient rehab center, where I was an inpatient after the first two surgeries. I wanted some form of closure, validation, and I hoped to find it in a conversation with my physical therapist, Keith, and my occupational therapist, Abby.
In trying to remember who I was, Abby asked whether I was bald at the time. I was gobsmacked—of course I wasn’t bald, I had a stylish buzz cut. But then I realized that though it was a really short buzz cut, which may have looked bald to someone without a discerning eye.
When I got back home from that visit, I found a photo from back then. And there I was, with a really short stylish buzz cut. But though my hair was short, a large clean shaven area around the scar from the second surgery was clearly evident—I still ended up with a crop circle.