“Don’t move!”
I sat as still as I could, barely breathing.
The nurse barked at the technician, “Go get another gown and spread it under her feet.”
Then it was my turn. “Okay, now stand up. Onto the gown. Easy, easy. There it is!”
I too had seen the tiny silver ball roll down my front onto the gown on the floor. He pointed. “There! Right by your foot!”
I was about to go in for a brain MRI and needed to remove all jewelry. I’d removed my earring, necklace, and bracelets at home. I took off my rings in the changing room. But the daith piercing was a problem. I didn’t even know how to undo it, let alone take it out. It was in such an awkward spot.
I asked a spiky haired woman in the waiting room who looked like she had plenty of experience with piercings. She shook her head. “You’ll have to get it put back in at the store.” According to her, captive bead daith piercings (a ring with a bead fastener) were particularly difficult to remove. “They’ll just have to put tape on it.” Though that didn’t sound right, I hoped for the best.
The technician confirmed my suspicions. “No metal in the MRI machine.”
I sighed. “I don’t know how to take it out. Do you?” 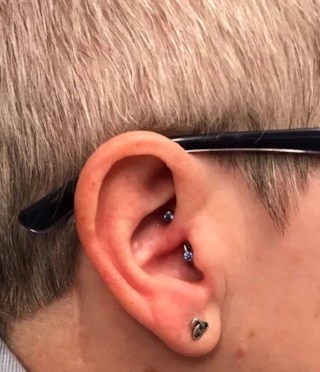 He shook his head. “I have no idea—I don’t have any piercings. Tattoos. But no piercings.” He led me across the hallway, towards a big guy wearing green scrubs. He was bristling with hardware in his ears, nose, lower lip, eyebrows, and I didn’t want to know where else.
Unlike the technician, the nurse with multiple piercings had yet to learn that it’s okay to admit to ignorance. He attacked it first with his bare fingers, trying to twist off the bead, a small silver ball. “It won’t move.” Next he put on a pair of lavender latex gloves. “Here we go. The ball is twisting!”
But then he stepped back. “It’s not working. Maybe if I hold one side with forceps.”
After more fiddling and yanking around on his part, and a couple of winces on my part, he paused. “Maybe forceps on the either side of the ball…”
A few hisses of pain later, he pronounced, “Got it!” but I sighed with relief too soon. “Freeze! The ball fell somewhere.”
When the nurse handed me the rest of the hardware, my heart sank. There was no way I could put it back into my daith piercing on my own. I might actually need to buy a new one—he’d opened up the ring too far.
On my way home, I realized it wasn’t the end of the world—I could always buy something new that would be easier to remove before my annual MRIs. Or, I could leave it as is, with nothing in there. After all, I wasn’t convinced that it was fulfilling its purpose, helping with my headaches.
I decided to hold off on making a decision.
A few days later, the decision was made for me—I suffered one of my excruciating headaches that lasted more than forty eight hours. I hadn’t suffered one of those since the piercing.