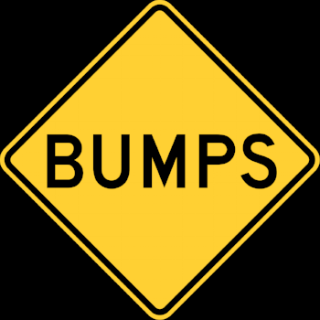 “You shouldn’t be driving.”
I sighed. “I know.”
I didn’t want to know. I wanted to stay in hiding. It was finally time to wake up. No more of the “maybe it was” and “but it’s only at night” or “it hasn’t really happened in years.” It was happening. I had experienced some events that were reminiscent of the seizures I suffered in the early days, and those flashes of light before I fell asleep at night. There were also those brief moments when I had no clue where I was while walking or driving.
Kelly, the neuro-nurse practicioner, nodded. “Yep, those are probably seizures.”
Could my recent emotional fragility have something to do with it as well?
“Have you been having a feeling of impending doom?”
Yes, I had.
“That’s another common one.”
Her words slammed me in the gut.
I was shocked, devastated, in daze. Why?
At some level I had known that I’d been experiencing seizures all along. But they were minor. They didn’t really count. They were probably just auras that never developed into full-blown seizures. I’d been shrugging off the occasional nudge to my consciousness that perhaps I really shouldn’t be driving. The notion of losing yet another aspect of independence was unthinkable. It would probably also mean the I’d have to increase my anti-seizure meds— Or worse, experiment with new ones…
Why was it only now that it was hitting me? Why had I been unable to admit to the possibility that I may have not been seizure-free all this time? And why was I so upset?
“You should make an appointment for a brain MRI as soon as possible. You’re due for one anyway. It’s been a year.”
I was due. It’ll be all right. There hadn’t been another bleed. Or had there? My heart sank.
“And we’ll arrange for you to make an appointment at the Epilepsy Monitoring Unit. Given your history, I don’t want to mess around with your meds. they’re experts, and they can figure out where their coming from.”
All I heard was the word “epilepsy.” Epilepsy?! That makes it official. Not just seizures, or seizure-like events. Honest to goodness epilepsy.
I fought off tears. I tried to tell myself that it will be fine. But it wasn’t. It wasn’t fine. I wasn’t fine. I was caught deep inside a heavy fog of bleakness. Miserable didn’t begin to describe how I felt.
Shortly after I got back home, I crawled into bed and curled up into fetal position. And I stayed there. Until my roaming thoughts brought me to the logistics of being unable to drive. Plenty of people manage fine without driving—I’ll be fine. I’ll figure it out. I’ll have to check on buses, and there’s Uber. And of course, between Joyce, Daniel, and Sarah, I’ll be in decent shape with rides.
I’ll have to condense my time at the office to as few days per week as possible. I should reschedule my meeting tomorrow, and the one on Thursday as well. Oh, wait. My MRI is on Thursday—I’ll walk. It’s close enough.
A tad more than inconvenient. Much less independent. I gulped. No– I’ll be fine.
It’s actually a nice walk to the hospital. And I could use the exercise In fact, this’ll help me slow down overall. Pacing myself to accommodate the bloody brain has always been difficult for me.
It will be okay. It’s just a matter of getting used to it. It’s just a matter of time.
But right now, I needed to stay in my blanket fort a while longer.