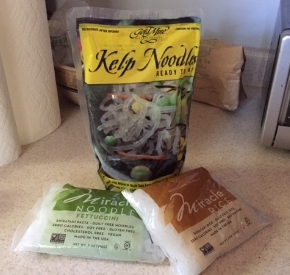 I stared at them, sitting so boldly on the kitchen counter, and they stared back—slimy rice, slimy noodles, anchovy paste. I could see myself finding occasion to use the anchovy paste. But the slimy stuff? What possessed me to buy them?
I stood in front of the Asian aisle, vaguely searching for…what? My thoughts had little direction, my only guidance a dim notion that I needed something to help me out of my predicament, the sensory overload I was experiencing.
Teary eyed, I browsed, drifting over the mundane, ramen noodles, jasmine rice, sea weed. Occasionally, I paused quizzically at unfamiliar products, not sure why I was drawn to them. Rice spice? Interesting. I could probably use that. Whatever it is. There were two kinds—I chose one at random.
I barely noted the noodles, until I reached the slimy ones. I skimmed over the instructions. I was to drain off the viscous liquid then rinse them in cold water, before doing something to them. Cooking? Or were they precooked? They looked like worms suspended in cloudy gook. Definitely slimy. I tossed a bag into the cart, then another of slimy rice.  Hey, there’s another bag of worm-like noodles. Slightly different. I tossed it in as well.
Recognizing my vague meandering through the store as a symptom of overload, I wandered in the direction of the checkout. But the notion that I needed cheese wafted through my consciousness. Back I went to get the cheese, then remembered I needed to get to the Gluten Free aisle, though I’d already picked up a loaf of bread there. I picked up another loaf of bread, just in case. 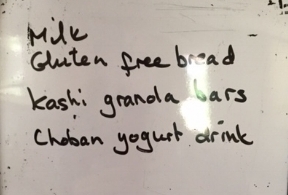 I continued to drift through the store, sniffing. I picked up a can of Portuguese sardines in spring water, another of kippered something, mackerel? Herring? And some anchovy paste. Anchovy paste? Why would I want anchovy paste? I shrugged and dropped it in. I also got some hummus that I didn’t really want and more containers of yogurt than I would eat before the expiration date.
When I reached home, I surveyed the bags of groceries. Milk, yogurt, bread—that was all I needed, all I was going to buy. I swore to myself it was going to be an in-and-out shopping trip, like I normally do now.
And here I was with eight to ten grocery bags full of stuff. The sardines—we’ll eat, at some point. The kippered whatever they were as well, probably, maybe. Why two loafs of bread and ten yogurts? I shrugged—perhaps I’ll eat all the yogurts, and I’ll put one loaf in the freezer. What about the huge variety of granola bar type stuff? I knew from past experience that most of them will be disgusting…
But worst of all, what about the slimy noodles? Two packets of them? What was I thinking? Why? I hadn’t done this in a few years. What went wrong? Why was this case of overload worse than usual?
As soon as I’d crossed the threshold into the grocery store, my tears had welled up. It usually took an aisle or two before I got in trouble with sensory overload, and here I was, barely through the doors, and already fighting the urge to escape. I had had a tough time recently, between unforeseen travel and more work than usual…
At least I still had the wherewithal to head straight towards the milk aisle. Except that on the way, I placed too many containers of yogurt in the cart. But I did make it to the milk before sensory overload took over and I started roaming through the store barely functioning.
There’s a food drive coming up at work. Maybe I can donate a variety of granola bars, and some slimy noodles.
Does anyone eat slimy noodles?