Reclining on the gurney, head raised, craning my neck, I tried to take in my surroundings as I entered neuro-rehab center. But all I saw was the nurse’s station and my room. Nothing else. The rest was irrelevant. And once I settled into my room, the nurse’s station ceased to exist. This room was my world, in its entirety.
Only after I entered the rehab gym the next day, did it pop into existence. It was huge, cavernous. I caught snapshots of physical therapists, but only mine, Keith, stayed with me. The others disappeared into a void, as did the other patients, only to reappear out of nowhere, when they touched on my proximity. 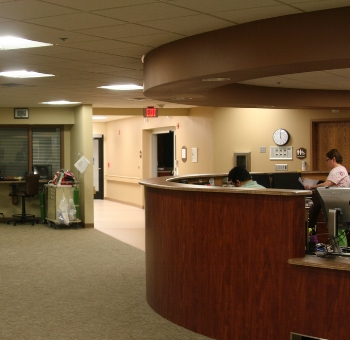 www.flickr.com
Whenever I was in the gym, I knew of the main entrance, but my awareness of the back doorway was vague—I knew there was something there, which had nothing to do with my existence. It was irrelevant, which therefore, in my mind, was a blank area, empty. But on my fourth day in rehab, Keith guided me through it to search for a piece of equipment. I froze when it appeared—another exit! And when Keith and I returned to the gym, I noted that it was also an entrance. but as we proceeded with rehab exercises, I forgot the door was there, until a couple of years later, when I visited the rehab center with Cindy.
I didn’t expect to remember the outside of the building. After all, my time there was spent on the inside. But I did. On the other hand, I did expect to remember my way from the building entrance to the rehab center. After all, Abby, my occupational therapist, had taken me along that route several times. But I didn’t, there’d been too many empty spaces along the way, spaces that two years previously were irrelevant and didn’t register. I had to rely on Cindy, who had been to visit me when I was a patient there.
I recognized the doors to the center, but was unsure after I stepped over the threshold. Had there been a reception desk at the entrance two years ago?
I knew that I should turn left, but the receptionists guided me to the right. I only had a dim sense that there was something back there, yet another blank space that I’d blocked out of my consciousness. When she pointed towards to the back entrance to the gym, I became disoriented and discombobulated. But when I paused at the threshold, I recognized it for what it was—that other entrance, and exit, the one that I’d only used once before. As I stepped across it, I felt proud.
Then again I hesitated. The gym was huge, cavernous, too large, and full of shadows.
I felt small and lost, irrelevant. I didn’t belong here. This space was no longer a part of me.