Two days after I got back from a grueling trip, and the bloody brain had yet to lash out.
I always found myself in trouble within a day of returning from a trip, no matter what. I knew it was a matter of time. But two whole days, and nothing? That was a first. Could it be that the one meltdown I suffered mid-trip was it? Oh, there was also that other bad day. Though it actually wasn’t that bad—taking it easy for a few hours took care of it.
Was this yet another step towards recovery? Did the bloody brain believe that I paid my dues in full during the trip. That didn’t feel right. The trip was a really tough one, worse than usual, and when I got back to Pittsburgh, I had to dive back into the real world with no recovery time whatsoever.
On the third day after my return, I was still okay. Only a mild headache. Day four, and I was still functioning well. Why hadn’t the other shoe dropped yet? When was it going to drop?
Day five, six, and I was still all right. Better than okay. I was going strong, working on the grant proposal, preparing for the semester, hiring TAs.
I allowed myself to be cautiously optimistic. Perhaps the daith piercing was doing the trick. Perhaps crippling headaches were a thing of the past. 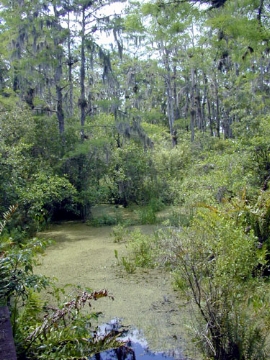 Swamp–Wikipedia
I should have known better. On Day Seven, the other shoe finally dropped with the usual horrific headaches, which lasted several days. I was baffled, the bloody brain had never waited this long before. In fact, in the past, it broke out the whip within two days, tops.
Joyce suggested that I finally gave myself permission to let go and fall apart, and I realized that in fact it had happened several times over the last year.
This time, after I got back from my trip, swamped by several urgent projects, I waited until I completed them before I allowed the bloody brain to take over my body, to demand that I take a break, now.
In my previous life, I always got sick after I finished the semester. As if adrenaline had been coursing through my body through the stress of the semester. Once I worked my way out of the mire of the semester, there was no longer a need for the adrenaline to keep me going, to keep my immune system functioning. And once the adrenaline stopped taking over from me, my immune system went back to normal, crumbling in the face of all the infections it had been blocking.
Was this similar? Had I gained sufficient control over my body, over the bloody brain, to keep the backlash in check until I was able to take a break? Only allowing the bloody brain to do its thing when I had time for it?
On Day Seven, the bloody brain insisted on levying my long overdue taxes, making its message loud and clear: No more! You’d better bloody rest, or else.