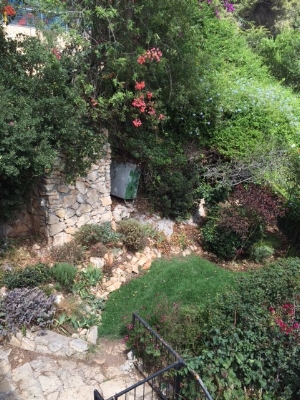 The flight from Pittsburgh to Boston was fine. No screaming kids. No loud adults. Boston to Tel Aviv was not so fine. Whiny kid in the seat in front, nagging kid to the left. Their voices cut through the veneer of numbness induced by my noise canceling headphones helped.
The train ride was fine, and I seemed to be handling the jet lag okay. But on my first morning, as soon as I stepped out into the midday sun, I knew I would be in trouble. I wore a hat, I stuck to the shade as much as possible. But the bloody brain objected with a touch of vertigo, headaches, a sense of heaviness.
The bloody brain stopped playing nice on the fifth day, after a walk to and from the grocery store. I could tell, the sun was too much, the heat and light seared through my brain. But I continued to push myself, helping Mum with the groceries. Even though I realized I needed to give my brain a rest, I sat with her while she took one phone call after the next. I knew, but I didn’t want to worry anyone. Dad’s ill-health was enough of a concern.
And finally it caught up with me, despite the naps I took every day, despite peiodic breaks in the silence of my air conditioned room. My brain could no longer manage the heat, emotions, noise, colors.
Tears streaming down my cheeks, I escaped to my room. Tears and more tears, dripping onto the floor, mingling with the snot, soaking my pillow.
It’s time for a nap.