I woke up in the middle of the night with a horrific headache. Every motion, however slight, set off a new explosion of pain, taking the headache to another level. Though I knew that chances were that nothing would help, I downed ginger and turmeric caplets. Perhaps it would at least take the edge off. Nothing.
I applied pressure to my temples, the flesh between my thumb and forefinger, on either side of my nose bridge. But none of the pressure points helped. It tried making myself relax, breathing evenly through it, and somehow, sometime, I fell asleep.
In the morning, the headache, though still very much there, was at a manageable level. Afraid to detonate another explosion, I moved gingerly. In the past, no matter how careful I was, something always set it off. But not this time—over the next couple of days, I was able to function through it.
What could possibly have changed? I’d tried the turmeric and ginger combination before, but it was never this effective. I doubted I was getting sufficient rest to warrant such a miracle.
I was almost afraid to acknowledge my suspicion, I didn’t want to jinx it. But, could it possibly be the daith piercing? 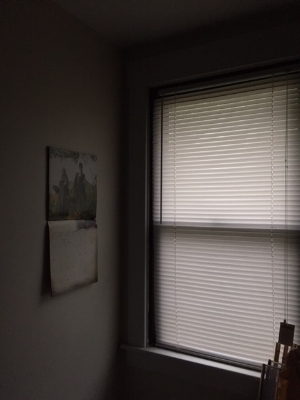 A Daith piercing is an ear piercing that passes through the ear’s innermost cartilage fold, at the root of the helix where the tissue joins the head. Many daith-pierced migraine sufferers swear that since the the piercing, the frequency and severity of their migraines decreased significantly. The only relevant fact that may explain such results, is that acupuncturists place needles in that same position to give temporary relief from headaches.
I was willing to give it a try. In the worst case scenario, if it had no effect on my headaches, at least it would cool.
It did look cool, very cool. But my headaches continued to plague me like they’d done since the brain bleeds.
When I saw no immediate effects on my headaches, I mentally shrugged. Perhaps it took a while before such a piercing became effective, that it needed to heal fully first. Or maybe it just wouldn’t work for me.
A couple of weeks later, I went on a trip to Santa Fe. I wasn’t surprised when the bloody brain lashed out at me—it did so every time I traveled. But this time seemed different. Could it be that though the headache was crippling, it wasn’t quite as excruciating as previous ones? Or was I imagining it? Was it just wishful thinking on my part? It was hard to tell, I was befogged by the pain.
Between another grueling trip and a heavy workload when I got back, this last month was draining. Not surprisingly, I suffered a headache throughout. But it didn’t grow past the manageable—though it was hard at times, I was able to work through it. It only ventured into the debilitating at night, and by morning, I was functional once more.
This morning, my first day of rest since I got back from my trip, I woke up with a blinding headache.
I knew that this was it. I was finally going to pay the price for overdoing it all this time. My entire day would be shot, possibly tomorrow as well. I’d be a prisoner in my darkened bedroom.
But after I ate some protein, I felt better. The headache was still there, but not central to my existence.
What was going on? I thought back. I slept much of the day today. And after the Santa Fe trip, I slept off and on for a couple of days. I did the same after I got back from my most recent trip. I’d never really done that before unless my headaches forced me into bed.
Perhaps I have been getting enough rest. Or could it be that the bloody brain was waiting to hit me hard when I least expected it? But maybe, just maybe, the daith piercing is doing the trick, reducing the severity of the headaches.
Dare I hope?