My new psychiatrist asked me, “Did you actually have a plan?”
Yes, I did have a plan.
The first time, it was a lousy plan. I looked to the bottles of pills lined up on the nightstand—anti-seizure meds, blood pressure meds, over-the-counter pain killers, and various supplements. I figured that the pain meds weren’t potent enough to have much of an effect unless I downed a ton of them. The supplements probably wouldn’t work either. I wondered whether the anti-seizure meds would do anything, and quickly convinced myself that they would probably just leave me in terrible shape, but alive. The same for the blood pressure meds.
It couldn’t have taken me more than a few seconds to realize that my thought were a little too close to being suicidal to my taste. I immediately phoned Cindy to tell her about it and she asked me to promise her that I would phone her if I ever had similar thoughts, no matter how fleeting or serious. I made the promise. “But I don’t really have it in me.”
The second time was in hospital, after the brain stem surgery. I felt so horrendous. My headaches were indescribable, I couldn’t find a comfortable position for my head. I suffered from severe vertigo and my balance was so bad, I couldn’t even sit up. I had a lot of trouble understanding what was going on around me. I felt completely disconnected from my surrounding and from myself, as if my body didn’t belong to me. I was incapable of functioning at a semi-decent level.
I didn’t want to live like this, completely dependent on others, a burden on my kids. This time I had some really powerful painkillers on hand. I knew they would do the trick. But the nurses stayed with me until I downed them. Could I palm one of the two and collect them over time? It would be difficult, but if these horrific headaches continued like this, I’d have ample opportunity. I decided to give it two weeks—if I didn’t feel better in two weeks, I’d kill myself. Would I be able to accumulate enough pain pills? If only I had access to the internet to figure it out.
I felt better the next day, and completely forgot about my suicidal ideation, until I spoke to Cindy the following day. According to her, I’d kept my promise and told her of my thoughts. I reassured her. “Oh well. I feel much better now. And you know me, I don’t really have it in me.” 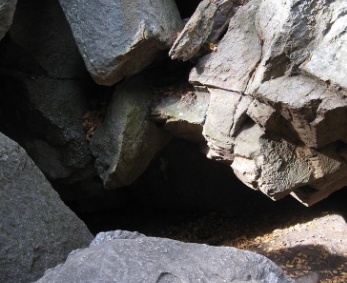 Purgatory Chasm Kings Cave commons.wikimedia.org
The third time was the worst. It took place a couple of months after the surgeries. I broke my promise and kept my thoughts to myself—I didn’t want Cindy to stop me. I didn’t mention it to my therapist either, for the same reason. This time, I didn’t need to think of a plan—I already had one. When I was discharged from hospital, they gave me a bottle Vicodin, or was it Tylenol 3? I’d stopped taking them because they’d lost effectiveness as pain killers. I had plenty left.
When I finally crawled out of the deep dark chasm, I admitted to myself that I probably suffered from biological depression—it was time to look into antidepressants. But I still believed that I didn’t have it in me.
It was only three years after the surgery, when I was writing about these incidents, that it finally hit home, that yes, I do have it in me, that I had actually been suicidal. And that was when I finally admitted to Cindy that I had been suicidal that third time.
After having been stuck in that abyss for a good fortnight on that third occasion, I never wanted to go there again. At the first signs of anything, I immediately contact my psychiatrist.
I did get swallowed once since then, my fourth time—I reached that point so quickly that I didn’t realize what was happening. By as soon as I recognize the abyss for what it was, I scrambled out before I got stuck.
Yes, I have some suicidal thoughts here and there, but I learned my lesson from the fourth time. As soon as thoughts of “They’ll be better off without me.” crosses my mind, the alarm bells go off and I take action. Unfortunately, along the way, I came across information on how to do the deed with meds that are readily available.
I have to remain vigilant.