Hamsa—a Middle Eastern symbol of protection against the evil eye.
My maternal grandmother believed in the evil eye, as did my mother, though to a lesser degree, or so she tried to lead me to believe. I, of course, did not. I just found hamsas aesthetically pleasing. I loved the hamsa that hung above the entrance to living room of my childhood home. I was delighted when I found a hamsa charm in market in the Old city of Jerusalem—I made an earring out of it and wore it frequently when I was a teenager.
Before I underwent brain surgeries, several friends presented me with talismans.
Rhonda gave me a small lead sculpture in the shape of a saguaro cactus. “They’re survivors in the desert, like you are. You’ll be okay.”
And Sara sent me a necklace with a three dimensional star of David, a Jewish symbol of protection. “I first thought of sending you a chai, but changed my mind.”
Many Jews wear the Chai symbol is usually worn as a charm on a necklace. In Hebrew, chai means “alive.” It is a common gift for bar mitzvas and for people in life-threatening situations.
Mum gave a broach in the shape of a bee. “Given their physical characteristics, it’s a miracle that bees can fly.” 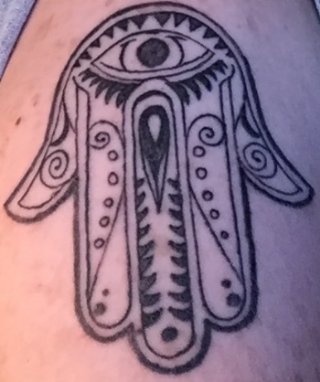 My hamsa tattoo
None of these talismans meant much to me, but since I was about to undergo brain surgeries, I figured that I could use all the help I could get—they certainly couldn’t hurt.
I felt very differently about the bracelet my sister, Rachel, sent with my mother. It was a made of a red cord with a hamsa charm. I took great comfort in wearing it and felt uneasy whenever I was separated from it. I wore it during my stay in hospital, only taking it off for the surgeries and when I took a shower.
I lost the bracelet a few months later. I was distraught until I found another bracelet with a Hamsa to replace it. But it didn’t give me that same feeling of safety when I wore it. If anything, I felt an emptiness. I bought a silver hamsa from a friend who’d got it in Morocco. Though I wear it at all times, even when in the shower, it still doesn’t feel quite right.
A couple of years after the surgeries, Mum wanted to buy me a piece of jewelry of my choosing. I picked a hamsa bracelet made of gold. Though I love it, and also wear it all the time, again, it doesn’t bring me the same level of comfort Rachel’s did.
I’ve acquired several hamsas since then, a ceramic one from my sister to hang on a wall, even a hamsa tattoo on my shoulder. The one that brought some semblance of comfort is one that my daughter, Sarah, gave me. But it’s not the same.
I continue to search for one to replace the bracelet Rachel gave me, one that will bring me solace as hers did.
I’m still not sure why. Why hers made me feel so safe, and why I continue to search.