BLOODY BRAIN: Let’s talk about your decision to undergo brain surgeries. As you said, your life was a shambles because of me. It took you a couple of months to think surgery. Why that long?
ME: Actually, I thought about it earlier. A couple of weeks after the acute bleeds, I met with a neurosurgeon. He told me that the bigger angioma that had bled was operable. The one in the brain stem was not and he’d only consider treating it with gamma radiation. According to him, the risks weren’t worth it at that point. Only after another acute bleed would he be willing to discuss treatment.
BB: I wonder if he was playing chicken with me.
ME: I think that, like a lot of other neuro-doctors in Pittsburgh, he didn’t really know angiomas. Looking back, I’m dumbfounded that he even contemplated the wait and see strategy. Another bleed in the brain stem, no matter how severe, could have killed me. He must have acted, or not acted for that matter, out of ignorance.
BB: I was actually thinking of going for another little bleed in the brain stem, just to stir things up a bit. A week or so after you ER visits ended and you started breathing easy. It was hard to let go of all the excitement. Lucky for you I held off.
ME: For us. 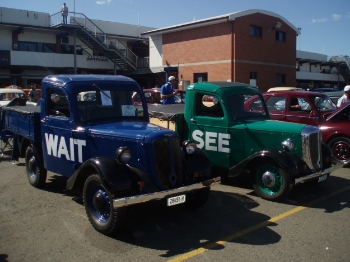 BB: Whatever. I know you were interested in the gamma knife surgery, and were disappointed when he said no…
ME: Thank God he didn’t do it. The angioma community regard Gamma Knife Surgery as controversial at best.
BB: Back to your decision. You were told surgery wasn’t a good idea, then out of the blue you start looking into it on your own. What happened?
ME: It wasn’t really sudden. The doctor’ wait-and-see plan distressed me. I was already in terrible shape—the possibility of things getting significantly worse was unthinkable. But I was still in a numb yes-doctor-no-doctor mode. Until that encounter with the on call neurologist who was convinced I was faking it all… she shook me out of denial. I finally understood that most of the docs in Pittsburgh just didn’t know enough about the disease and weren’t willing to admit it, at my expense. It was up to me. It was time to become proactive.
BB: Was that when you knew you were going to undergo surgery?
ME: No. it built up. At first I wasn’t sure where to start with my search to find some form of treatment. Then I came across that memoir where the author describes her journey to surgery with Dr. Spetzler. She too had a brain stem angioma. That’s when I realized that surgery was actually a viable option. Next, Cindy found an announcement for a seminar on angiomas to be held at Barrow (where Spetzler practiced). Now I knew where to start, with Dr. Spetzler. It didn’t take long before I knew I wanted him to give me a second opinion. Bill and I collected all my medical records and sent them off, and two weeks later I received his letter recommending brain surgery.
BB: So that’s when you made the decision?
ME: Not really. I was more focused on the fact that he believed me, that he really got it that I was in bad shape.
BB: So when did you make the decision?
ME: In his letter, he offered to make an appointment for a consult. So I phoned the next morning, just to make an appointment for a consult. Except that the lady asked me whether I wanted to make appointments for the surgeries. And I heard myself doing it, the first surgery for the eighth of August and the brain stem surgery for the tenth.
BB: So that’s when you decided.
ME: Kind of. I wanted to meet him—I didn’t want just anyone rummaging around in my brain. I wanted to make sure I liked him. So I flew to Barrow in July for a consult with him.
BB: Was that when you knew?
ME: Yes it was–Spetzler was very direct and didn’t shy away from the tough stuff. And most importantly, he had a lovely smile.