My quality of life finally improved—now, my terror had direction.
A hurricane slammed into me towards the end of March 2007 when I suffered acute brain bleeds. One day I was fine, and the next—seizures one after the other after the other, indescribable headaches, no balance to speak of, doctors’ appointments, physical therapy, hospitalizations. The bloody brain assaulted me from all directions. I had no idea what would strike me next and where it would come from.
And at the beginning of May, the storm abated, leaving piles of debris behind. No new bleeds, no more hospitalizations, no new scary symptoms. But I couldn’t drive, I couldn’t teach or dragon boat, and worst of all, I couldn’t be the mother I wanted to be. My headaches weren’t quite as crippling, nor as frequent, but they were still there. My balance was better, but still prevented me from walking unaided. 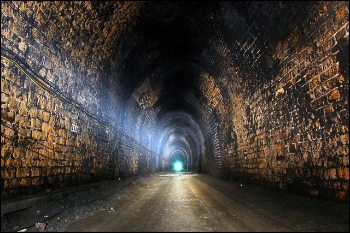 Standedge Tunnelwww.geograph.org.uk
Instead of living from within a fog, I now benefited from a couple of hours of lucidity a day–I became able to think rationally about how to prevent another onslaught. There was only one treatment for cavernous angiomas, the tangles of malformed blood vessels that caused the bleeds—I decided to undergo brain surgery to remove them. And once more the terror engulfed me.
Except that now, I knew exactly where the source of my fear lay—I had a direction to veer away from, a place to hide. Now, I could work to distract myself from thinking about the up coming surgeries in August 2007.
Before, not only was there no light at the end of the tunnel, but there was no tunnel. Now, not only was there a tunnel, but there was a light at the end of it. I could only hope it wasn’t an oncoming train.