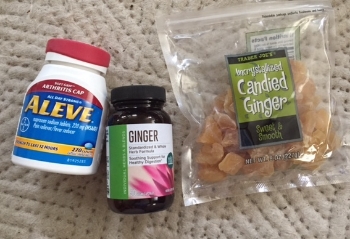 “I assume you’ve been having de-stress migraines?”
I was surprised for a split second—how would she know? Then I remembered—Sara, a friend, also suffers from frequent horrific migraines. She knew what it was like.
On Wednesday, I had to say no Irina’s invitation to go out to dinner. Earlier that day, I wondered whether I should cancel my lunch with Sara and my TA, Daniel.
Then yesterday, Thursday, when I woke up with a bad headache, I held an inner debate. Would some crystallized ginger take care of it? Probably not. I should take a ginger capsule as well. Maybe some turmeric tea—you never know, it might help. I decided to take a couple of Aleve—though like any other over-the-counter pain killer, it hasn’t even been taking the edge off the headaches for me over the past few years. But, who knows, maybe this time it’ll work. And a shower might make a difference. And of course, some protein.
The headache was severe enough that I knew all those precautions might do nothing for me. I wondered whether I’d have to cancel my doctor’s appointment. And what about the afternoon tea with Alex?
This has been going on for three weeks now, since the semester ended. And throughout this time, I’ve had an ongoing headache that won’t quit; it merely changes in intensity. Three weeks—shouldn’t I be doing much better by now? Apparently not.
I spent much of the spring semester with headaches; a couple of them kept me in bed in a darkened room for a day or two, or three, preventing me from doing my job. But most of the time, I was able to function through them.
Joyce told me that at the end of every semester, I take a month, sometimes more, to recover from the semester. She said that it’s especially bad after the end of the academic year. A whole month? Sometimes more? Surely she was exaggerating. But no, I now recalled that she was right.
Wait! In the past, a week into summer break I would have taken a trip out of town. Wasn’t that why it usually took me so long to recover? That was why I dediced to stay home between the end of the semester and the start of the summer research program. I thought I would recover faster.
Hopefully I’ll be doing better by the end of next week, in time for our summer undergraduate research program.