Tonya warned me, “They’re like potato chips. You can’t have just one.”
I scoffed. Of course I can have just one. I only wanted one—my semicolon tattoo. It was symbolic, meaningful. I had no reason to want another. There was no other meaningful symbol I might want tattooed on my body.
But then I saw a beautiful henna tattoo done in white. I’d always admired those gorgeous mehndi designs adorning Indian women’s hands and feet during celebrations. But the white was doubly beautiful. I wanted one, a mehndi-style tattoo, in white. Then I found out that white tattoos don’t do well, they turn yellow and dingy. What about in a rust color, like henna? Or what about black?
I didn’t want it on my hand. The healing process would be awful and it would probably wear off in no time. I could get it on my shoulder. Sort of dripping down my arm. After looking up various mehndi designs online, I realized that that wasn’t what I wanted. What about a Shipibo-style tattoo, or Maori?
Ooh! What about Mayan-style, or Inca, or Aztec? I found exactly what I wanted—it looked like a stork. Though maybe it was an ostrich. It was gorgeous. That’s what I wanted.
I was ready. And Sarah said she’d come with me. I made an appointment. I texted Rosa an image of my bird. “But what does it mean?”
I thought quickly. “It’s a symbol of a bird soaring who has yet to take off, like I am.” For some reason she actually believed me. 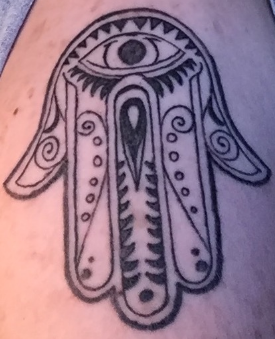 Cindy also asked about the meaning. “I’m always hesitant about using a symbol from another culture when I don’t know what it means.” She had a point. in fact, that was an excellent point.
I idly skimmed through collection of mehndi designs–a hamsa! That was it! I foundmy tattoo. I’d actually been contemplating getting a hamsa tattoo for a few years now and had completely forgotten about it.
I decided on a hamsa tattoo on my shoulder. A relatively small one, innocuous, sort of. But when I got to the tattoo parlor, the artist explained to me that in order to include the detail I wanted, it would have to be bigger than I’d originally planned.
I now have a largeish hamsa tattoo on my shoulder, in addition to the semicolon on my calf. Two tattoos.
Alex joked about me getting a third. Again I scoffed. But later that day, it occurred to me that I might like a bee, a small one, innocuous. I’ve always had a thing about bees. My name in Hebrew, Dvorah, means bee.
Perhaps that’ll be my next potato chip. Or maybe I’ll go with another semicolon , on the inside of my elbow. Or both. Or neither.