ME: Why? What prompted you to wreak havoc on my life?
BLOODY BRAIN: Why not? The angiomas were there, not doing much of anything. It was getting boring. It was kind of a spur of the moment thing–oh look, here’s something to do to alleviate the boredom.
ME: Didn’t it occur to you that the consequences could be serious, life threatening even?
BB: Boy, it would have been a bummer if you’d died, we’d died. I guess that could have been considered committing suicide on my part. But back to your question. I didn’t really think about it. I was just bored, messing around.
ME: Didn’t it bother you after the fact? Did you regret it?
BB: Yes and no. I mean, I didn’t expect it to be quite as bad as it was. But it was… I guess, in some sense, entertaining. It certainly relieved the boredom.
ME: Wait. Are you saying you still don’t really care?
BB: Oh, I do care. Though not in the way you seem to think that I should. I mean, it adds spice to our lives, which is great. Also, let’s be honest, you seem to believe that some good came out of it. I’ve actually heard you say that it was a blessing in disguise.
Me: Now be honest. How do you feel about it now? The fact that you still “mess around” with me, as you would put it?
BB: Mostly it’s for fun. But sometimes, you really annoy me. I mean, for crying out loud, I give you plenty of warnings and you still ignore me. I have to show you who’s the boss…
ME: I can’t believe you just said that. You are a malicious son of a bitch, aren’t you?
BB: Oh, get over it. When you don’t pay attention, guess what? I demand it. Like everyone else.
ME: But don’t you think things get out of hand sometimes? 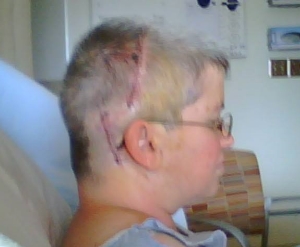 The day after the 2nd surgery (Photo by Jonathan Brandon)
BB: I guess the depression thing was and still is a bit much. I’m not particularly enamored with the whole suicidal ideation thing you’ve been through. I have to admit that it makes me a tad nervous. Well, and also the surgeries. I wasn’t expecting it to go that far. Though those were your decisions. They had nothing to do with me.
ME: What do you mean they had nothing to do with you? Your actions led me to them. I’m not sure it would have occurred to me to go in that direction if it weren’t for the seizures, for instance. And those wee definitely your doing.
BB: Okay, okay. No need to get in a snit about it. Maybe I did go overboard with the seizures. They were a tad too frequent. They actually made me a bit uncomfortable. Can you imagine having electric shocks going through you without warning.
ME: Gee, let me think. Yes, I can imagine it.
BB: I felt as if I lost control at times.
ME: I’d say so. Anything else scare you along the way?
BB: Well, yes. The third surgery scared the crap out of me. But that really wasn’t my fault. Dr. Spetzler messed that one up. If he’d been more careful, you wouldn’t have had that leak.
ME: I actually resent that. He did a really good job. I wouldn’t be in such good shape now if it weren’t for him.
BB: Sure. Whatever. Can we stop now? I’m getting tired.
ME: Be still my heart. You? Get tired?
BB: Yeah, yeah. No need to rub it in.
ME: Actually, I too am exhausted. We can continue with this another time.