That elusive other shoe finally dropped on my last day in Israel. When did the headache start? In the morning before I left? Or was it the afternoon? I was certainly in bad shape by the time I said goodbye to my parents in the evening. 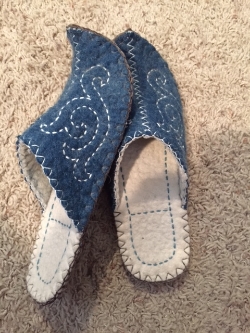 Unlike the rest of the headaches I suffered throughout my trip, this was a real killer. I knew at its onset that there was no appeasing this one, that no amount of meds or ginger or turmeric, or anything, would prevent it from escalating into the screaming red zone.
I had hoped for the best case scenario, where the inevitable other shoe would wait to drop until I returned home. I suspected it would happen during the trip. The possibility that it would drop en route was unthinkable.
Not only did the unthinkable happen, but it got really bad at the worst time possible, when there was absolutely no hope for any form of respite until I reached home, more than twenty four hours later, when all it could do was worsen.
My ability to function through my headache became iffy before I left my parents’ house. But I held it together, somehow. I had to. I didn’t want to worry them unduly. And I still had to manage the taxi ride to the railway station, then the train ride to the airport, then passport control and security and boarding the plane.
At various points along the way the odd whimper of pain escaped before I managed to stifle it. Focusing on holding myself back from bursting into tears intensified the pain. It also caused an odd ringing in my ears, which exacerbated it further, as did moving and thinking.
I had mixed feelings about boarding the plane. On the one hand, once in my seat, I’d be able to settle in and relax a bit, which would probably bring me some relief. But on the other hand, I dreaded sharing a confined space with this particularly cacophonous crowd of passengers, which included several screaming babies and an exuberant youth group.
I had no choice. And it was bad.
I’m not sure how I functioned through the trip. I only remember it in hazy snatches. Waiting in line for the bathroom, pretending to be relaxed and pleasant while urgently needing to pee, incredulously watching a young mother getting up to rummage through her stowed carry-on while we were taxiing for take-off, trying not to gag visibly at the smell of cheesy feet newly released from the confines of plastic footwear. The pounding in my head in sync with the youth group’s loud countdown until the New Year, the jagged pain as we went through some turbulence, and the searing agony whenever I woke up from yet another fitful nap.
Somehow I survived and made it on to the next flight. By the time I reached Pittsburgh, my entire body felt bruised and battered from the inside out. My progress through the terminal was slow as I tried to avoid exacerbating the pain. I felt as if a veil surrounded me, separating me from the world. Everything seemed foggy, sights and sounds muffled, as were my thoughts. The one thing that kept me going was a vision of myself crawling into bed.
Finally, after a bumpy car ride and a draining climb up to my bedroom, and sank into bed.
I stayed in bed, dozing on and off, for more than twenty hours, rising briefly less than a handful of times to eat and go to the bathroom. Once my headache waned to the point where I felt alert and could move without wincing, I returned to my normal level of activity, or at least as normal as one could be with a bad case of jet lag.
Except that I wasn’t jet lagged. Not really. Yes, I still had a headache, but it was at a level that I could easily function and think through. But at no point did exhaustion hitting hard out of the blue as usually happens to me upon my return from trips abroad. I went to bed at a normal time and awoke the next day at a normal time. At no point within the next few days did I have trouble staying with a normal sleep schedule.
Could that twenty hours of sleep on my return have something to so with that? Had I found a cure for jet lag? A horrific headache that conks me out for a good day or so?