Day three of a splitting headache. And I don’t regret taking an active part in the Martin Luther King Junior Day festivities. I was a member of a panel whose purpose was to promote discussion about race and diversity on campus.
Although I knew I could well use the day off, I accepted the Colors@CMU team’s invitation. No matter what anyone wanted to believe, there were diversity-related issues on campus, and we needed to bring them out into the open. I needed to be a part of this. I felt that I could make a significant contribution.
The morning of MLK Day, I woke up with a bad headache. The thought that I should stay at home never crossed my mind.
Ginger? Sure. Turmeric? Why not. Aleve? Maybe. Protein? Definitely. By the time I was ready to leave, I managed to take the edge off the headache, which was good enough.
Unfortunately, as the event progressed my headache grew worse, and worse. At one point, two hours into the session my headache was back in full force. But I didn’t give in, not yet. I knew I’d pay heavy price for continuing despite it, but I had one more thing to say.
The bloody brain lashed out at me just as I was about to leave for home. An overwhelming wave of vertigo slammed into me. I stayed in my seat to wait it out, and when it seemed to have waned, I tried to get up only to find that poor balance prevented me from getting going.
I finally made it home with an excruciating headache that lasted three days. Despite the backlash, I don’t regret having gone. It was too important to miss, and I firmly believe that I mate a worthwhile contribution to the conversation.
These days I have to pick and choose which events I attend. I used to attend the Maryland Sheep and Wool Show every year. I went to the one that took place eight months after the surgeries. Totally overwhelmed by the crowds and the noise, I suffered several major meltdowns. I never went back. It wasn’t worth it. 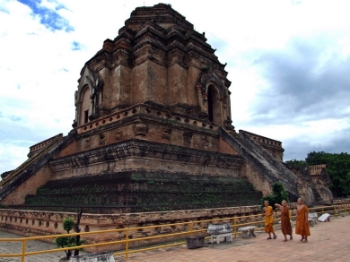 Thailand http://takopix.com
Three months later, I flew to Florida for a weaving conference. It too was a bust. I no longer go to math meetings, I forgo sporting events and trips to the local amusement park. I only attend small parties, and only if I feel well rested and have time to recover after the fact.
On the other hand, I continue to participate in plenty of other activities. It’s about risk-management. I have had cut back on travel but I haven’t given up on it completely. Though I don’t participate in various conferences, I do attend a small writing workshop every year. And I did attend the MLK day event.
Occasionally, I’d feel a bit of an inner twinge when I had to miss out on a family activity or a writing conference. But I’d quickly shrug it off. It really wasn’t a big deal. It was only a minor part of an overall fulfilling life.
A few months ago, Cindy deliberately kept from me the fact that she attended a concert. When she finally did mention her outing, she confessed that she hadn’t mentioned it because she didn’t want me to feel that I was missing out on yet another activity.
I shocked myself by bursting into tears. Apparently I did mind missing out on so much. All these years I’d managed to keep it to myself, from myself, but now it was out there, in the open. Cindy, upset she’d caused so much distress, apologized.
But after I calmed down, I realized that contrary to Cindy’s instinct to protect me, wanting to hear about her adventures overshadowed being upset. Having to forgo various outings, I wanted to live vicariously through those who can go.
When Joyce traipsed around England, I wanted to hear all about it, and when she told me about a dinner party in a noisy restaurant, I questioned her closely about who was there and what she ate. When Daniel went to Cancun, I was disappointed that he had little to share. And I was beaming as Adam told me about his adventures in Thailand and Cambodia.
I pore over photos and drink in stories. And my mind soars, when my body cannot.