I sat in the movie theater, my eyes glued to the screen, at times glistening with tears. Throughout the movie, I felt physically uncomfortable, almost ill. 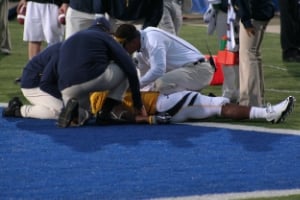 I wasn’t upset by the autopsy scenes—I covered my eyes for those parts. What filled me with anguish was the subject matter of the movie “Concussion,” the fight to get the NFL to admit that football could cause brain damage, severe depression, excruciating headaches, dementia, and various other symptoms associated with traumatic brain injury (TBI).
I’d been a bit apprehensive about seeing the movie because of my own experience with brain damage. But I felt that it was important that I see it, for the same reason. From what I’d read and heard about it, the movie was raising awareness about brain injury in general and concussions in particular.
I assumed that the focus would be on the impact of brain injury on the players, the deficits, the symptoms, the lifelong recovery. I thought that those would be the parts that would get to me. And they did, I was upset at seeing these men in distress, their families devastated.
It didn’t occur to me that one f the main takeaway messages was that awareness doesn’t necessarily lead to prevention.
The fact that the NFL admitted that football players are at high risk for often brain damage, is a good thing. But it is merely a small step in the right direction. The fact that there’s now a protocol for diagnosing concussions on the field and not allowing players who are showing signs of a concussion back into the game, is a good thing.
But it’s not enough. By the time they are diagnosed, it’s too late, the concussion has already taken place, the damage already done. And the damage from repeated concussions is cumulative. Does the NFL take care of ex-football players who are now paying the price? Is there a fund available to these brain damaged players to pay for costly medical bills, for rehab?
I came out of the movie theater shaking my head, deeply disturbed, knowing that there will be no dramatic change in the rules of the game to prevent damage caused by repeated trauma to the brain. I know, that the players, wanting to get back on the field, feeling invulnerable in their lack of experience, in their ignorance, will downplay their symptoms, will also exacerbate the problem.
The damage caused to my brain was nowhere near as devastating as was depicted in the movie. Yet, as a brain injury survivor, with my “lesser” deficits, I do not understand the urge to put anyone in danger of repeated trauma to the brain.
Recently, one of the Steelers, Antonio Brown, was hit so hard in the head that he lost consciousness. My stomach turned when I realized that the main concern of his fans was when he would be able to play again.
Shouldn’t we be more concerned about the extent of the damage, whether he would be able to recover? Whether he will be allowed to recover before he goes back into the game?
I can only hope that at the very least Antonio Brown will be discouraged from returning for a good long while.