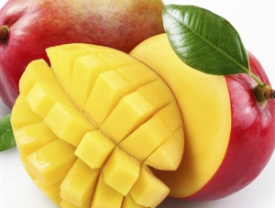 Growing up, we only ate mangoes once a year. It was part of our Rosh Hashana ritual, a chaser to a blessing, thanking God for providing us with sustenance.
Dad intoned the blessing, and as the sound of our Amens faded into silence, he cut open the mango.
Mango was my favorite fruit. I practically salivated when I caught a whiff of the heavy sweetness as Dad broke the skin. He used to cut the mango into five elliptical slices, two on one side of the pip and two on the other. Then he passed them around, one for each of us, my parents, my two brothers, and me.
I had my own ritual when it came to eating it. If I ended up with one of the two outside slices, I criss-crossed it with my knife, stopping short of the peel. I then turned the peel inside out to separate the cubes, and picked off each cube with my teeth. When I finished those, I attended to the peel, slurping as I gnawed off the remaining pulp.
There was no tidy way to eat the middle slice, the one that included the pip. As I gnawed and sucked on it, the juicy mango fought to slip between my pulp covered fingers. By the time I had cleaned the pip of any residual meat, including the more fibrous parts, my cheeks and chin were smeared with juice. 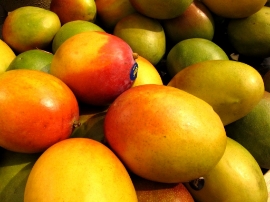 The slice between the inner and outer ones required the least effort for the most return. Once I cut off the peel, I could focus solely on eating the rich orange meat, luxuriating in the soft texture, the juiciness, marveling at the flavor, sweet with a touch of tartness.
In Israel, fresh mangoes were only available in the fall, around Rosh Hashana. After I came to the U.S. I was delighted to learn that they frequented grocery stores several times a year. During my first few years here, I yielded to my greed and gorged on them at every opportunity. My eyes would glisten whenever I caught sight of pile of mangoes in the produce aisle. When I got home I practically drooled when I made that first slit in the skin.
After several years of giving in to my lust for the fruit, it lost its status as a special treat. I still loved them, but it wasn’t quite the same. Also, unfortunately, along the way, I became allergic to them.
I only eat them rarely, when the call of the mango is insistent, relentless, irresistible. My mouth gets itchy and my lips swell a bit, but as long as I don’t allow myself to be too greedy, I’m okay.
Mmmmmangoes.