A few weeks ago someone asked me how long ago were my surgeries. I had to think. “Is it seven years? Or eight? Perhaps nine? Wait. They were done in 2007, it’s now 2015. So it’s been eight years.” I nodded. “Yes, eight. Actually, more than eight years, close to eight and a half years.”
The first brain surgery was on August 8, 2007. The next was two days later, on the 10th. And the third was two weeks later, on the 24th.
On August 9th, 2008, I fell apart.
Joyce tried to console me. “Look how far you’ve come. You’re doing so well.” but I couldn’t see it. All I could see was a deep dark nightmare of a year. Life was so difficult, the headaches, the emotional volatility, and the headaches. The ridiculously short attention span and poor memory, and the headaches. The crippling fatigue and debilitating headaches.
I was inconsolable. I wept off and on the rest of the day.
Ruth, a friend and breast cancer survivor, told me that the first anniversary was the hardest. She said that she didn’t even remember the second until after the fact. “Try to see it as a celebration of how far you’ve come.” But I wasn’t ready to celebrate. 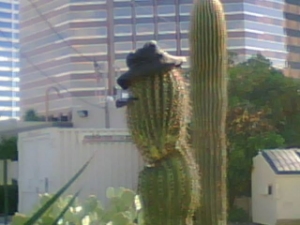 The hospital where I had the surgeries. (Photo by Jonathan Brandon.)
I almost forgot my second anniversary.
I was writing an essay where I made mention of the first surgery. I started typing in the date, August_ when the computer suggested that I press enter for the complete date. Without thinking I did, and when the date August 8 popped up I wondered, “How did it know the date of the surgery? But it got it wrong by two years, it was 2007, not 2009.”
Even then it didn’t click. Only when I actually changed the 9 to a 7, as in 2007, did it finally dawn on me. “Oh yeah, it’s the anniversary.” and that was the end of that. I kept tabs on myself over the next couple of days, but I was fine. No meltdowns, nothing.
My third anniversary was an inadvertent celebration.
A couple of months before the anniversary, I started feeling the need to see my scars. Perhaps I was hoping to gain some form of closure. Over the years I’d been able to feel them, but I’d never seen them. After talking to some friends about it, I decided to shave my head and have someone take photos.
A photo-journalist friend agreed to help out. She documented the whole process, Joyce shaving my head, me stroking the buzz fuzz on my way to the bathroom to search for my scars in the mirror. When she showed me a photo of the scar, I felt an inner shift, as if I’d found my place, like a dog circling to find the right spot then settling into it. I’d been unsettled for a long time, wound up tight, tense, and now I could let go and breathe. Now I could move on to be me.
I felt a need to celebrate.
Shortly after the photo shoot was over, I danced down to the nearby marina, where Ruth and her dragon boat team were preparing to get in the boat. I wanted her to see. I knew she’d understand, that she’d be happy for me.
Coach Lynne saw me and smiled when I told her the story behind the buzz-cut. “Cool. And it’s on your third anniversary too.”
I had completely forgotten.
Since then, some years I remember my anniversary, others I don’t. But until last year, my seventh after the surgery, whether I remembered my anniversary or not, I kept count of the years. If anyone asked me how long it had been since the surgery, I answered without pause.
This year was different. Not only did I pause, but I also had to think it through, and even when I came up with the answer, I felt the need to double-check.
I don’t believe there’s a moral to this story. Nor are there any deep questions remaining to be answered. Nothing to reflect on and explore.
It’s just something that struck me as curious.
Moving on.