Growing up, there was a special place in my heart for the Shehecheyanu blessing we recited on Rosh Hashana, the Jewish New Year:
“Blessed are You, Lord our God, King of the Universe, who has granted us life, sustained us, and enabled us to reach this occasion.”
It wasn’t the blessing itself that I saw as special, but the fruit we ate with it. Unlike all the other Jews I knew, who ate pomegranate for Shehecheyanu, we ate mango. I loved mangoes and Rosh Hashana was the only time we ate them.
How old was I when I realized that our tradition was different from everyone else I knew who celebrated Rosh Hashana? When did Mum offer an explanation?
Though consuming pomegranate to mark the new year is the norm in Israel, it isn’t the only option. In fact, any new fruit is acceptable for Shehecheyanu. And fruit is classified as new if it hasn’t been eaten since the previous Rosh Hashana.
But why did Mum insist on choosing mango rather than pomegranate? Was she merely following her parents’ tradition? Or was there more to it? Did she just enjoy being different?
I’ve carried on with our family tradition. I’m not sure why. Come Rosh Hashana, I go to the grocery store to pick out a fruit that I’m sure none of us have eaten during the year.
Following my mother’s tradition makes me feel closer to my family. I also enjoy being different. I never choose pomegranate. But unlike my mother, I stay away from mango as well–I can’t classify it as “new.” Throughout my childhood in Israel, mangoes were only available in the Fall, around Rosh Hshana, whereas here they are readily available year-round, and I love them so…
Every Rosh Hashana, I dare myself to find a fruit we haven’t eaten since the previous Rosh Hashana. One time I went with pluots, a cross between plums and apricots—that was the first time I’d ever seen them, so I knew we were safe. They were a resounding success–I haven’t been able to resist them since, which ruled them out for any of the following Shecheyanus. We’ve also had star fruit, prickly pear, and yellow kiwi. I’ve never chosen papaya—I have no idea how to choose ripe ones, nor how to eat them.
Sometimes the choice is limited and I’m not sure whether we’ve eaten any of the fruit that is available.A couple of years ago I tried two grocery stores before I found the Shehecheyanu fruit. I won’t compromise–I have to be absolutely sure that it’s new. Not for religious reasons, but for the sheer pleasure of the game. I enjoy the challenge. So far, I haven’t come home empty handed. 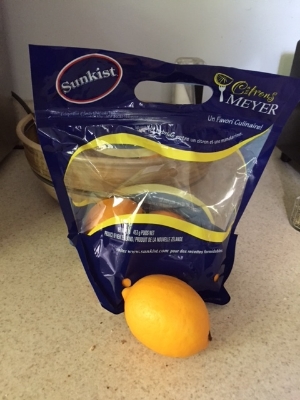 Sometimes the game lands us in questionable waters. One year I bought a horned melon. Tasteless and slimy, it was a bust. Since then, our tradition is not only a challenge, but also a bit of an adventure.
This past Rosh Hashana, I found a lemon and tangerine hybrid that was new to me. That sounded promising–I’d only had good experiences with citrus hybrids. Though I couldn’t get a good look at the fruit in the sealed bag, I could tell that thepeel was like that of an orange, in both color and texture. That was good enough for me.
I became a bit suspicious after I got home and took one out of the bag—its resemblance to a lemon was uncanny. But my level of optimism didn’t drop all the way to the bottom of the pit–it did have that orange tint to it after all.
As usual, we followed the letter of the law—we didn’t taste it until we said shehecheyanu.
It was a bust, a huge bust.
Ingesting a piece of slimy tasteless horned melon was nowhere near as bad as touching this lemon-tangerine hybrid to the tip of my tongue. I can handle the sour of a lemon.  But this was way beyond any sour I had ever tasted. Next to this hybrid, or whatever it was, lemons are sweet.
There was no hint whatsoever of tangerine in the flavor. What were those tangerines thinking? A slight orange tint to the peel? Really? A hybrid is supposed to be a combination, a joint venture. Had they been traumatized by group projects in primary school? Did they not believe in contributing their fair share to the venture?
Daniel pointed out that the name, “Citrons Meyer,” was a dead giveaway. I hadn’t noticed the name. I’d been desperate –I hadn’t had time to go fruit shopping until the eve of Rosh Hashana. I’d almost given up when I spotted the citron Meyer in the store–I was too excited about finding a new fruit to examine the bag carefully.
Screwing up my face, I tried to force myself to set my teeth to it. But I just couldn’t. Touching the tip of my tongue to it was as good as it was going to get.
I wonder what adventure will befall us next year.