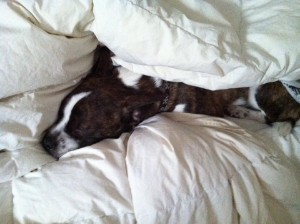 I awoke shivering in the middle of the night—my cotton blanket wasn’t effective against the cold. I got up to fetch my comforter from the closet. I had to extricate it from under a pile of suitcases that had accumulated since last winter. After pondering the issue, I spread the comforter over the cotton blanket—I could always remove it if I got too hot.
Warm and toasty under the double layers, I fell right back asleep.
I woke up the following morning and congratulated myself for thinking clearly in the middle of the night and acting on my thoughts. Stretching comfortably, wriggling my toes, luxuriating in the softness and warmth, I was tempted to stay under the covers a while longer. But I had to get to work. I opened my eyes.
What’s this? There was no comforter. I looked on the floor beside my bed. Nope. Had I not got up in the middle of the night? Was it all a dream, a very realistic dream?
I peeked in the closet, and there it was, the comforter, under a pile of suitcases.
***
I woke up from a deep sleep filled with conviction, “Espadrilles!”
The word was sharp in my mind. I tried to soften it and get back to sleep. But it wouldn’t. And I couldn’t.
I knew exactly where I was headed with this conviction—my next article about textile techniques from around the world was to be about espadrilles, the fabric slip-on shoes with jute soles. The original, “authentic,” form, were, and still are, artisan-made in Spain.
The next word was, “Hemingway.”
Well of course, Hemingway wore espadrilles while in Spain–I should mention that fact in the article.
Now I was wide awake. Resigned, I turned the light on, reached for the pen and pad, and wrote down the word espadrilles. Now I was able to get back to sleep.
When I woke up, I went straight to the computer and conducted a little research on the internet–definitely espadrille. It was time to delve more seriously into the subject. Though I did need to get ready for work… I hurried downstairs to search through my textile books.
***
I panicked. What should I get for Daniel’s birthday? I had less than a week, and I hadn’t even begun to think about it. I could always give him money; I’d been doing that over the last few years. But I liked to supplement the money with something more personal, something I suspected he wanted, a surprise. So far I’d been able to find just the right thing. It was always such a pleasure to watch his face light up when he saw my offering.
Then it hit me. Cold yesterday, he’d brought his comforter downstairs to the living room, and wrapped himself in it. I’d buy him a nice soft throw to snuggle into when he was downstairs. Brilliant.
Once that was settled, I woke up.
I decided to stop by the store later and pick up a throw for him. But wait… his birthday was months away. What was I thinking?
I must have been dreaming. Another one of those vivid dreams, where I can’t tell dream from the reality.
It happens a lot now–vivid dreams that I’m sure are real. Like I used to experience when I was I was a young child. I remember waking up petrified from a nightmare, then searching my room for snakes or lions, my two worst fears at the time. I don’t remember when my dreams lost that intensity, but I do know when they regained their sharpness–after the brain surgeries.
I have phoned both Daniel and Sarah in the middle of the night to make sure they were all right. They know the drill and are extremely tolerant of me and my post-surgery fears. I’ve also phoned my parents in Israel. “Is everything all right? You and Dad? What about Rache? Simon? Their families?”
Recently, I went through a patch of nightmares that left me shaking, heart pounding. But over the last few nights, my dreams, though vivid, were definitely not scary, just a bit… bizarre. Whether the dreams are good, bad, or strange, they invade reality well into my day, affecting my emotions and behavior.
Yesterday I bought Daniel a nice, soft, cozy throw. Even though his birthday is months away.