When the topics of lice or fleas come up in conversation, I start itching.
When the kids were in daycare and we were notified there was a case of head lice among the kids, my head started itching. It itched when I found out that they were having a problem over at another daycare. When my mother recalled details of the lice epidemic in Israel in the 1970s, I itch.
Once discussions about the issue abate, so does my itching. Usually.
Recently, I had good reason to believe that our household had been exposed to lice, albeit briefly. Itching, we sprang into action. We fumigated. We sprayed. We hung comforters out in the sun. I checked Daniel’s hair and Joyce checked mine. Still itching the next day, I asked Joyce to check me again. Then again the next day. She assured me each time that I was fine, then refused to check anymore. 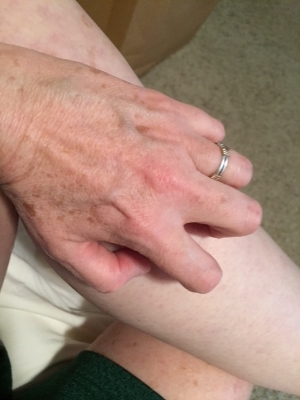 I used the shampoo and ran the fine-toothed comb through my boy-short hair for several days in a row—nothing. I finally stopped itching.
Several weeks later, when Gus was visiting, I saw a flea crawling under the white hair on his belly. Yikes—he’d slept in bed with me!
Itching all over,  I gave Gus the treatment, checked the bedding, did a heavy load of laundry, and… What else did I need to do? With lice I knew the protocol, but not really with fleas. They didn’t particularly like people, did they?
I phoned Cindy. She didn’t seem really alarmed. “Though they are notorious for carrying the bubonic plague.”
“They what?!”
Now I started itching in earnest. Joyce wasn’t around to check me. I itched and itchedr, through the day and into the night. I even dreamed of itching.
Still itching the next day, I tried to convince myself I was being ridiculous. Daniel didn’t seem to be itching. And there were no signs of fleas anywhere. I’d only see the one. And when I still lived in Israel with my parents and my brother, Jonathan, brought a flea-ridden dog into the house, no one panicked.
I asked Cindy what she did. Apparently, not much. Fleas aren’t much of a problem where she lives. She doesn’t even treat her dogs regularly.
I briefly contemplated using the head lice shampoo. But I knew I was overreacting, just like I had way back when the kids were in elementary school. Wait. Could I possibly be allergic to the shampoo I was using?
While the kids were in elementary school, we were notified that there was a case of lice in the school. All the kids were being checked by the nurse daily. It never spread. But I continued to itch. At the time, Bill and I were still together. I asked him to check me, and again. Even though I showed him how to do it, I wasn’t satisfied with his technique. I asked the school nurse to take a look—nothing. Yet the itching continued.
Finally, after checking me once more, the nurse suggested that I might be allergic to my shampoo—I had red welts on my scalp that weren’t caused by scratching (though I may itch, I’m always careful about scratching). Skeptical, yet desperate, I switched to another shampoo. And within a couple of days, lo and behold, the itching stopped.
Could it be that history was repeating itself? Not-so-skeptical, I tried a different shampoo. Was it just my imagination or was I itching less? I used the new shampoo the next day—definitely less itching. In fact, no itching. No fleas.
Today, a couple of itch-free weeks later, Sarah phoned me to let me know she’s on her way over with Gus.
I’m feeling a tad itchy.